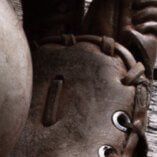 Memoir: I was not an athletic kid by any 7th inning stretch of the imagination. As an only child, I lacked the opportunity to compete in the physical arena on a regular basis, whether through sports, roughhousing and the like. Consequently, I was weak, contact-averse and both physically and emotionally fragile. Furthermore, my divorced-yet-still-amicable parents espoused a hippie philosophy in which zero-sum competition was avoided at all costs.

Despite coming of age in this nearly sports-proof incubator, I found myself increasingly intrigued by baseball. I began to watch it when nothing else was on during the doldrums of summer reruns, bored at first but gradually seduced by the inexplicable ritual.

Always supportive of my interests, my mom took me to a few minor league Spokane Indians games. It was like a drug, an effect amplified by my mistaken belief that I was watching Major League games. (Cleveland? Spokane? Close enough.) I scrambled for foul balls like they were treasures which only by extreme fortune had somehow escaped from a divine realm, one with which we can only communicate by an alchemy of leather and hardwood.

If securing a foul ball was a thrill, it was nothing compared to asking the seemingly godlike players to autograph it. Although I am a Mariners fan, to this day I hold a misplaced affinity for the Oakland A’s because one of the Northwest League’s visiting Southern Oregon A’s players was especially kind as we indulged our shared delusion of his grandeur.

Soon I was collecting baseball cards, poring over stats I scarcely understood. One day when I was about 11, my dad surprised me with a new baseball glove—new, that is, to me, for it was clearly not new but seemingly decades old, an antiquated artifact he had found in a pawn shop. The dark brown leather was soft with a good grip, ideal for its intended purpose. Although it was a man’s size, my little hand had no trouble controlling it, my index finger sticking outside like the pros. In short, it fit me like a… well, similes fail me, but it fit me perfectly.

When my dad would come back to visit, we would sometimes play catch, accidentally upholding one of the few classically American traditions observed in my otherwise decidedly countercultural clan. Short-handed, we called up an old tin watering can from Triple-A to play catcher. With the glove perfectly balanced splayed open on the spout, it formed an inarguable strike zone for my dad to pitch while I took BP.

To everyone’s surprise, especially mine, I could actually hit a little bit when it was time to play baseball in PE. Not with any power, mind you, but I was a decent contact hitter. Of course, it helped that I was short and had a strike zone about the size of a postage stamp. More often than not, I would either draw a walk or leg out a single. While no one would confuse me with an athlete, I still had a junior high PE Hall of Fame on-base percentage.

Of course, such glory days could never last. Due to a variety of circumstances, I soon entered a very dark phase which I have spent the ensuing decades struggling to escape. There was no more baseball for me. The glove and the baseball cards got packed away.

Still, I kept the glove. Every few years I might dust it off for idle recreation, amazed at how it still somehow fit me perfectly. The glove had been with me for so long, it had become a part of me, something I imagined I would pass on if I ever had kids.

Then, one day, I learned that I had already lost a part of myself and not known it. During a painful breakup (you know, as opposed to one of those fun, easy ones), struggling with sobriety, I was packing up my belongings from a damp Portland basement. I recoiled from a pile of solid mold, and my disgust turned to horror as I realized that I was looking at what used to be my glove. As I struggled to scoop it up and throw it away without getting sick, the internal mechanism that allows one to process pain through crying simply broke.

As I stand somewhere past the statistical halfway point of life, I know the game is not over. While my one true glove is lost and gone forever, I know it would have wanted me to play on. Now that it is spring once again, perhaps it is time to find another glove, the next link in the leather chain which runs through America’s adulthood as it ran through my childhood.

I’ll just have to take a watering can along to make sure it fits.

Tom Lackaff was lucky enough to be born in Oregon. Some of his earliest memories are of frolicking on Cannon Beach, Short Sands and a litany of local littoral locations. His father has lived here for over half of Tom’s life, and consequently he has grown quite connected to the area.