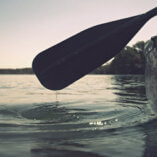 Memoir:  Jim and I had been canoeing through Canada for years and, in fact, Jim had been doing so since he was a child.  Every trip to Canada was precious, and the past only encouraged more of the wonder that has always been Canada to us.  Jim planned the trips, bought the supplies, and organized the logistics.  My contribution was basically to build fires and decide which way was North.

Somewhere in our travels, Jim had landed on a map that claimed the Missinaibi River was the last undammed voyageur river to the James Bay.  In order to avoid waiting until this river was developed, we decided we should go soon.  Late that summer, we did just that.

We drove North and East in Ontario to the town of Mattice.   We stayed for the night, and left the next morning.  We dropped our canoe with our gear in it into the river at the edge of town, and the current took us North.  It was warm, beautiful, and still.  Small rapids propelled us forward with minimum paddling or corrections.

By afternoon, we decided that this seemed to be an easy trip.   As we were discussing this, a sudden wind spun our canoe around, and then we were going backwards.   We corrected and then waves of rain began to fill our canoe.  The sound of both wind and rain was deafening.  We paddled for hours, but ceased to make any real progress as the wind and rain gained strength.

We began searching for a campsite.  Such sites are rare, and both sides of the river have small and densely joined spruce and birch.  There is almost nowhere to land.  Based on river flow and direction, Jim found what might be a campsite on the East bank named Isabel.  We ran ashore, and began looking for a clear spot for the night.  Jim and I blundered among the tightly woven trees, got separated, found each other again, and then found the campsite.  It was under water.

We secured the canoe and pitched our tent at the edge of the clearing just above the water line.  Finally, as nightfall arrived, we decided we should make a fire.  Because the rain continued to pound, Jim assembled his seveya to see if we could start a fire with white gas.  But the seveya would only flame gas rather than mist the gas for a fire.  A part was missing.  We fooled around with the stove for awhile, ate some M&Ms, and went to sleep.  Before we gave it up for the day, Jim pointed out that if this was an easy trip, everyone would do it.  Further, Jim found hope in the wind and rain because still, dry weather brings out literally millions of mosquitoes.  By morning, our tent and sleeping bags were in several inches of water.  All of our gear was soaked.  We dressed in soggy clothes and I went in search of any firewood.  In a little while, in an outcrop of tree roots, I found birch bark and some kindling.

As I carried the firewood back to our campsite, I saw Jim outside the tent standing in shallow water.   He had given up on the seveya, and was now trying to light the gasoline in the fuel container.  Initially, I could see blasts of fire as Jim adjusted the nozzle and flow.  Then it seemed that the nozzle was open too far as a large and long flame of white gas shot into the air.  Jim simply realized that holding this canister of gas was not a great idea, and now he had to get rid of it.  His next move was one I would have never guessed. He gently tossed the flaming canister about two feet into the air, and, as it started to fall, he drop-punted it high into the air.  The canister spun end over end.  When it landed about 30 feet from our campsite, the flame of gas spread across the flooded site that was Isabel. For a while, the flames moved around the little lake, and Jim and I were simply witnesses.

When the fire finally died, I dropped the firewood.  We simply pulled the tent pegs, piled all our gear and the tent into a single soaked pile in the canoe, and set off paddling North.  Over the next week, we paddled 200 kilometers North to the village of Moosinee on the James Bay.  The weather improved, and three days later most of our gear dried next to campfires.  We had a wonderful trip, and we have told endless tales of the Missinaibi to anyone willing to listen.

Because the best part of these ever-growing tales is that the only witnesses are the fools telling the tale.

Gary has lived in Barview for 20 years and it is his favorite place in the world. He has travelled over much of the world with his favorite person, Carla. Together they spend a great deal of time with their dog Emily. She is not a good dog, but someday they hope she will be a great dog.