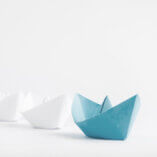 Lucius is unmoored, unanchored, untethered. Nothing holding him to his life where it should be. He lies awake, alone in the dark. There’s that time, sailing with the kids in the bay. In his memory it is a hot summer day, with just enough breeze to push them slowly through the water, but not enough to bring relief from the heat.

He hears the lap, lap, lap of water on the hull, the voices of Remy and Charlotte laughing and bickering, the luffing of the mainsail with the shifting wind. Their first tack takes the boat close to the marina, past empty boats bobbing and pulling gently at their mooring buoys, facing into the breeze. Lucius notices one small boat, a vintage Boston Whaler, white hulled with faded aqua blue interior. It rocks gently like the others but points at a different angle. It is not attached to anything and the breeze has turned it 90 degrees from the wind’s direction. The little boat drifts awkwardly past the boats at anchor. Lucius points it out to the kids. They notice it is partially filled with water. A lonely blue floating swimming pool. “What will happen to it, Dad?” they ask. He knows that the southerly breeze will eventually push it beyond the marina and into the open water of the bay. He tells them that maybe the police boat will spot it, or perhaps someone in a power boat will investigate and secure it somehow.

If no one intervenes, the little boat, its blue heart facing the open sky, will move slowly to the far northern shore. It will get grounded in muddy tidal flats, nudging itself into reeds and rushes, where red-winged blackbirds call to each other, announcing their territories, ignoring the empty blue pool nestled in their midst, tipped slightly to one side in the sand. Will it completely fill up with rain water over time? Become green with algae, spotted white with bird droppings?

Lucius tells the children to prepare to tack, asks Charlotte to pull in the jib line as he steers the boat through the quiet breeze. The sails fill and they slide past the marina. The kids spot a seal in the water and forget about the lost boat.

Just as they have forgotten about him, all these years later, caught up in the business of their lives. Lucius wonders now if the remains of that boat might still be visible in the shallows of the bay, or if, perhaps, someone found it that summer and returned it to its proper place.

Andy Barker taught creative writing as a high school teacher before retiring a few years ago. He now spends most of his time in Manzanita where he volunteers in the Hoffman Center’s Writing Programs. His stories have appeared in journals including the North Coast Squid and Rain Magazine.