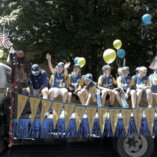 Memoir:  You know the type. That overbearing baseball mom who shouts through the fence: are you kidding me? when the umpire calls strike three on her precious boy. Or the meddlesome mom who interrupts the coach’s family dinner to complain about not playing her son. Or the know-it-all mom who coaches her kid from the sidelines: The play’s at third Robby!.

I am not one of those crazed baseball moms.  I don’t brag about my All-Star son, Matthew, even though he really is the best kid on the team. I am the nurturing mom who provides PP&Js, and purple Gatorades and crafts felt pennant flags with each player’s name shining through glittery gold and blue.

I admit, I have fallen off the good-mom wagon more than once during 10 years of nail-biting close plays, bad calls, terrible coaching and super slumps in Little League, High School and Club teams.

But I usually stake out my own private game suite deep in the outfield, where I can jump up and down, curse in peace and go unnoticed when I stick needles in my umpire voodoo dolls.

Little League was my downfall more than once. Matthew is up to bat and he drills the ball over a chain-link fence that looks as tall as the Empire State Building and as far away as New York. My vision enters a tunnel of euphoria and I let out a shriek of joy as soon as I hear a thunk, then the crunching of a shattered windshield.

I ignore the stink eye I’m getting from parents and let out another guttural burst of sheer delight. I’m focused on the Babe-Ruth moment as my boy circles the bases on his victory lap, ending at home plate to a flurry of fist bumps from his nine-year-old teammates. High on endorphins, the players smother Matthew in a jumping circle as if they just won the World Series.

Oh, crap. That was coach’s truck, one of the dads says.

He doesn’t know it yet, but coach has just experienced a Spring rite of passage – the same baseball baptism that happened to us years later during a playoff game. I made my husband circle the school’s lot three times before settling on a spot that I guaranteed would be safe for our Subaru Outback. But seconds after we got out of the car, a foul ball curved its way 100 yards over the fence and onto our windshield. That’s the last time you pick the parking spot, my husband tells me through clenched teeth.

We win the Little League game, 2-1, but coach gives me a disapproving glare as he approaches his disfigured truck. Matthew’s homerun ball bounced near a blackberry bush after forming a meandering spider web of glass that stretched from end to end before breaking into a dozen pieces.

Don’t worry, we will pay to get it fixed, I tell him. But I’m keeping the ball.

It is scuffed up and dirty but feels like a shiny gold nugget I panned out of a Yukon River. Another treasure to add to my collection of Matthew’s home-run balls – all dated and signed. They live in a wood-framed display case along with autographs of professional baseball players.

I am not proud of how I scored a few of those famous signatures. Like the time I took Matthew to a Mariner’s game for his 10th birthday. They were playing the Yankees, so we arrived early to get an autograph of his hero, Mariano Rivera. Mom, there he is, Matthew says pointing to the legendary Yankees pitcher, who is standing a half mile away between us and 20 rows of eager kids. We got here too late, Matthew says as if I had just flushed his birthday celebration down the toilet.

I go into aggressive baseball mom mode and barrel my way to the front of the line, elbowing several kids along the way. I hold out a baseball a few inches from Rivera’s face. It’s my son’s birthday today. He thinks you’re the greatest.

I avoid eye contact with angry parents as I head back to Matthew, clutching my prized possession like a Seahawks wide receiver guarding his catch.

It wasn’t the first time I left my scruples at home. After interviewing former Mariner’s pitcher Jamie Moyer for a newspaper article, I asked him to sign his picture that I conveniently had in my purse. His wife scolded me, saying it was unprofessional, but Jamie didn’t mind and snuck me the autograph when his wife left the room.

Baseball ran in my family long before Matthew started playing. As a kid, I spent every summer weekend at the Little League field a few blocks from our Los Angeles home. We were the quintessential baseball family, hosting weekend team pool parties, Dad coaching my three brothers and mom overseeing the snack bar. I can still taste those gooey poor boy sandwiches — crispy French bread, slathered with ham and melted Swiss cheese. A heart attack waiting to happen but so comforting to a six-year-old.

Back then, the innocence of baseball showed in the scruffy faces of the rag-tag teams who had dads instead of high-paid coaches and hand-me down bats instead of $500 Louisville Sluggers.

Even with today’s intense club teams and one-upmanship, I marvel at how Matthew managed to remain down to earth while maintaining his passion for the sport. He transformed from an immature, awkward, shy, Little Leaguer to a skilled and mature captain of the high school baseball team who is in his element behind home plate.

I can still see Matthew taking command of the field as the team’s ace catcher and flawlessly executing his famous “snap throw.’’  He crouches into a low, athletic squat, nodding to his pitcher as if to say, You got this. He stares down the runner at first, as if daring him to try the steal. The pitcher winds up. Matthew catches the ball and immediately shoots up like a rocket and hurls it 127 feet directly to second in plenty of time to pick off the runner.

I guess I am a crazed baseball mom after all. Crazy for my son.

Karen West once left Manzanita at the crack of dawn to make it to Yakima in time for her son’s championship baseball game. That was just one of many times that baseball playoffs interfered with the family’s 15-year tradition of Manzanita summer vacations. But it was worth it.