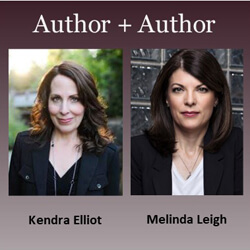 Click here to register for the Zoom Webinar Link. Be sure to save the email receipt from Zoom, as it contains the link to join the event. You’ll also receive a reminder email.

Join us for a free-wheeling conversation with Wall Street Journal best-selling authors Kendra Elliot and Melinda Leigh.  Kendra calls them “Author Buddies” even though they live on opposite coasts. In between publishing books in their own series, they also collaborate on a series together.  Find out how they develop their characters, figure out plot twists, and do the research needed to make their books authentic. Writers will be interested to learn more about their publishing path with an Amazon imprint.

About Kendra
Kendra Elliot’s Hidden was the third manuscript she finished, but her first book purchased by a publisher. It came out in the summer of 2012 and since then has sold well over a half-million copies. She won the Daphne du Maurier award for romantic suspense in 2014, 2015, and 2016 and has hit the Wall Street Journal’s best seller list ten times. She’s been an International Thriller Writers finalist and a finalist for Romantic Times Magazine’s best Romantic Suspense.  The Silence will be her seventeenth novel. She’s also written eight novellas and sold the TV rights for her Mercy Kilpatrick series.

About Melinda
#1 Wall Street Journal and #1 Amazon Charts bestselling author Melinda Leigh is a fully recovered banker. A life-long lover of books, she started writing as a way to preserve her sanity while raising her kids. Over the next few years, she learned a few things about writing a book. The process was much more fun than analyzing financial statements, and she decided to turn her hobby into a career.

Her debut novel, SHE CAN RUN, was nominated for Best First Novel by the International Thriller Writers. Since then, she has garnered numerous publisher awards, including two Silver Falchions and three Golden Leaf Awards. She is a two-time RITA® Award Finalist and has earned three Daphne du Maurier Award nominations. Melinda’s books have sold over 9 million copies.

She holds a 2nd degree belt in Kenpo Karate. She’s dabbled in Arnis stick fighting, studied Brazilian Jiu-Jitsu, and taught women’s self-defense. She lives near the beach with her family and a small herd of spoiled rescue pets. With such a pleasant life, she has no explanation for the sometimes dark and disturbing nature of her imagination.