A new history of the area—
Manzanita, Nehalem and Wheeler

The name Mark Beach is a celebrated one in our corner of Oregon, conjuring a beloved local historian and tireless civic champion rightly celebrated in 2019 as Manzanita’s Citizen of the Year.

That’s the lead up, now here’s the payoff: Mark’s an incredibly affable guy! He’s never met a curious local he couldn’t engage. Whether you’re new to town or a part of its colorful fabric, come meet Mark and pick up a signed copy of his must-have book of the region, Images of America: Manzanita, Nehalem, and Wheeler.

The book features 213 historical photos with ample insights describing the history of the immediate area, from the First People to the first hotel. In his introduction, Mark begins with the unknown.

“Nobody knows how may people lived on the Oregon coast before the earthquake and tsunami of January 1700”, he writes. “Maybe a few thousand. Maybe a hundred thousand.”

He continues, “Euro Americans did not know about the earthquake and tsunami that had devastated indigenous tribes.”

Government surveyors started plotting land on the coast in the 1850’s, Beach notes. “The Homestead Act of 1862 turned the trickle (of settlers) into a flood after the Civil War.”  Fifty years later, lots on Neahkahnie Mountain were going for $1000, with ads boasting, “the most delightful natural beauty spot on the Oregon Coast”! 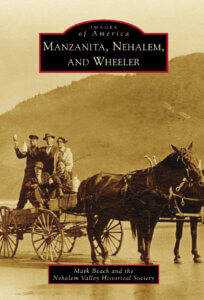 Images of America: Manzanita, Nehalem and Wheeler offers an enormous number of historical photos and ample anecdotes and facts. Mohler was once the village of Balm; its post office opened in 1897. Nehalem became a city in 1899. Women rode sidesaddle up Laneda  Avenue, perhaps on their way to meet the stage. By 1912, what had been Necarney Mountain got a newer, perhaps more marketable name: Neahkhanie Mountain.

Mark Beach has a wealth of local stories to tell. He’s a retired historian who moved to north county in 1992 and has since collected countless historical photographs for the Nehalem Valley Historical Society. Hundreds of locals have enjoyed his presentations and exhibits about local history, particularly his in-depth classes, which he plans to offer again in January, 2022.

Proceeds from the sales of Mark’s book benefit the Nehlem Valley Historical Society and, during this event only, the Hoffman Wonder Garden. For this reason and so many more, Come Meet The Author:
Mark Beach!

Meet The Author Event in the Wonder Garden: Mark Beach’s new history of the area— Manzanita, Nehalem and Wheeler


Situated on the main street in Manzanita just a few blocks west of Highway 101, the Wonder Garden is located next to the North Tillamook Library.