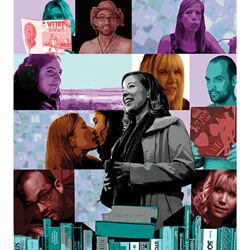 This film will be rescheduled — Stay tuned!

Hoffman Center for the Arts will screen the 2019 feature film
“The Space Between Words,” written & directed by Portland
independent filmmaker Ian Stewart Fowler

The film tells the story of an unassuming bookstore owner trying to accept new love five years after the death of her wife, when a chance encounter reawakens buried feelings.

Indianapolis-based Independent Critic Richard Propes said, “’The Space Between Words’ is an entertaining, engaging romantic comedy with quirks that never feel overly quirky and dialogue that makes you laugh with but never at these consistently enjoyable characters.”

Born in Vancouver, Wash. but raised in Gastonia, N.C., Fowler moved around for several years before settling in Portland. He studied fine art and spent his early career as a painter.

He directed his first feature film “Crazy Right” in 2016, earning nominations and awards from film festivals in the U.S., Italy, and Canada.

Fowler plans to attend “The Space Between Words” screening in Manzanita to discuss the film and answer audience questions.

CANCELLED
“The Space Between Words