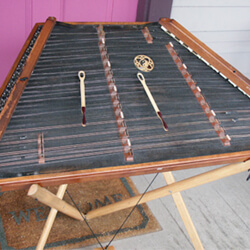 Mick Doherty is a performing and recording studio musician, playing hammer dulcimer, guitar, string bass, accordions, percussion and various sound effects devices.  Mick has performed in ensemble and as a solo artist from sidewalks to concert stages in Anglo and Latin America, Europe, Japan and North Korea (really!)  He has performed with the Trail Band, the Portlanders, the Snakeskinners, the Cascadia Folk Quartet, and Mason Williams with the Oregon Symphony.

Mick is co-founder of the award winning Oregon Shadow Theatre, where he composes music, and performs as musician, storyteller, voice actor and sound effects specialist.

He has composed music for film, theater and video, and is known nationally as a hammer dulcimer player and teacher.  He organizes the Hammer Dulcimer Rendezvous, an annual teaching festival outside of Portland, Oregon.