The ethnic diversity and rich musical traditions of New Orleans and the Louisiana bayous are the background for Oregon Shadow Theatre’s adaptation of the classic French fairytale.  Antoine, the miller’s son, inherits Puss the remarkable talking cat.  The two set out on a journey to impress the great King Calypso and the Princess, Sweet Emma. Soon Antoine is wrestling an alligator and Puss has to match wits with the shape changing Swamp Ogre.  Colorful shadow puppets inspired by Mardi Gras’ outrageous parade costumes along with live Zydeco and Cajun music give spicy flavor to this production.

The Oregon Shadow Theatre is a Portland based company specializing in the art of shadow puppetry.  Two time recipients of the UNIMA Citation of Excellence (the award created by Jim Henson as the highest award in American puppetry), the OST’s shadow plays have toured the United States and Canada, including performances at the Smithsonian Institution in Washington, D.C., the Detroit Institute of Art, the Northwest Puppet Center in Seattle, and the Center for Puppetry Arts in Atlanta.

Mick Doherty is a performing and studio musician.  Specializing in music in folk traditions, he has composed music for theater, video and film productions. Mick has toured internationally as a solo performer and ensemble member.  He currently performs with several ensembles, including the Snakeskinners and the Portlanders. 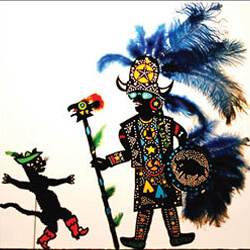