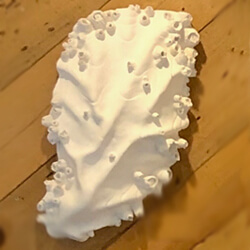 The Hoffman Gallery is free and open to the public 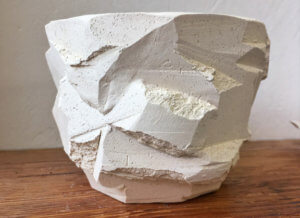 The Oregon Coast has beckoned Shane since a childhood family vacation from his Midwestern farm town.  He graduated from the University of Wisconsin-River Falls with a degree in Speech and Intercultural Communication and after teaching English in Taiwan for four years, Shane loaded his motorcycle, surfboard and dog into his van to explore the West Coast. He has been a resident here for nearly a decade and is employed as Stewardship
Lead at the Lower Nehalem Land Trust.

The colossal vegetation of the forests, the beating pulse of the Pacific, and the culture of community in the Pacific Northwest are irresistible and inspire Shane’s art. His ideas often start with natural objects surrounding him at the Oregon Coast. Shane challenges himself to create things he will never tire of contemplating.  He says of the creative process, “inspirations continually transform freely”.

Shane appreciates the plasticity of clay and enjoy ceramic objects that are representative of the material itself.  He continually experiments with new techniques, forms and usability and says “the possibilities feel endless.” 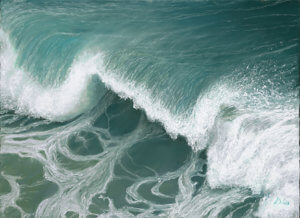 Stephen has a Bachelor Of Arts in Graphic Design from West Virginia Wesleyan in Buckhannon, WV. He makes his home in Portland. According to Stephen the inspiration for these ocean pastels resulted from the following experience:

About three years ago, I went out surfing at Indian beach, Oregon. It was a perfect sunny day with only three of us
in the water. I caught wave after wave, then about ten feet behind me,
I heard splashing. I looked over and a shark fin flopped out of the water beside the other surfer’s board. He yelled at me to get out of the water and we started paddling for our lives. We both managed to make it out of the water.

A few days later, a tornado struck Manzanita. I drove down to check on a friend. I could hardly see the road through the heavy rain. A bolt of lighting cracked down in front of my car and when I got to their beach house, I was shaken. 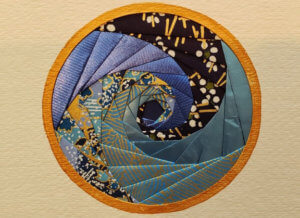 Patti Isaacs has been creating Iris Fold cards and framed wall art for more than ten years. Her demonstrations at the Japanese Gardens ‘Paper Garden Show’ were highly anticipated and heavily attended.

Patti has spent the past ten years developing her style and medium of expression. Patti is a silk painter and paper artist.
Much of the paper Patti works with is Washi paper that she brought back from her travels in Japan.

Patti has exhibited in numerous venues – most recently at the Guistina Gallery ‘Ode to Tides’ at the LaSells Stewart Center at Oregon State University (May 2-29, 2019). She has been a guest artist at Art on Broadway Gallery and a solo show at Art in the Loft in Seaside. She is a member of SPIN—Silk Painter’s International and is on the Washington County Open Studio board. She is teaching an Iris Fold class at the Hoffman Center in October. 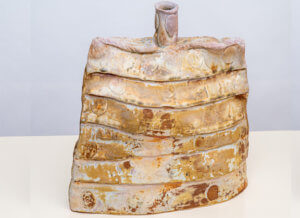 Barry doesn’t set out to produce art about one subject or another. His work tends to focus on the environment with an organic and at times industrial message. Some of Barry’s subject matter is about people’s daily lives, beliefs, routines and a comment on human nature. Weathered pieces of wood and old stones covered in beautiful moss remind him of the power of nature. The unknown aspect of firing atmospherically
really excites Barry. Whether in an underground pit, soda kiln or week-long wood firing, he works with the flame to decorate his pots.

Barry’s influences are first and foremost everything he sees, feels and experiences, but he has always been influenced by the work of Gerhard Richter, Robert Arneson and Toshiko Takaezu. The artists Barry most admires are Richard Diebenkorn, Bay Area figurative artists Elmer Bischoff and Joan Brown and the rustic Japanese Shigaraki ceramic style. Barry received his BA in Psychology from UCLA in 1975 and an MS in Epidemiology from UCLA in 1980. My ceramic art career began in 1968 as a freshman at Mt. Whitney high school in Visalia California where he won several awards for innovative work and as a member of the Tulare County art association. Barry works in clay, encaustic, clay mono-printing and multi-media and worked for ten years out of the Tortuga studio in Sebastapol California learning salt and wood firing techniques from bay area ceramic artist Diana Crain