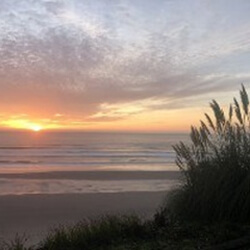 We had planned to go to Europe that summer. Then a pandemic happened.

Unable to fly overseas, my husband and I strategized: How would we escape the stifling Arizona summer heat?

In those early months, pretty much all decisions revolved around Covid incidence rates and the world’s emerging concept of what “safe” meant: if and how to travel, navigating rest stops, where to be and not be part of the problem. With all of this in mind, we scanned the latest Covid maps, looking for the lightest shades of pink, indicating areas with lowest infections. On these maps, Hawaii was nearly white, but they weren’t letting anyone in. Texas was barely shaded, but just as hot as Phoenix. Oregon beckoned, with Tillamook County a beautiful salmon shade of safety.

We knew very little about the area. On our honeymoon, years earlier, we’d stopped in Astoria while on a cruise. We remembered a peaceful beach, a bike ride, and maybe a cup of coffee or a beer. Years before that, when I was in my early 20s, I’d camped the Oregon coast, recalling images of sand dunes and a beauty I struggled to describe. Other than those early encounters though, we were North Coast virgins, inexperienced in its wonders.

Through the miracle of the internet and the glory of Airbnb, my husband unearthed our summer escape: a tiny cabin just steps across a gravel street to a cliff rising far above the waters of the Pacific. We booked it, and happily isolated ourselves for three glorious months.

I feel a bit guilty admitting this, given the havoc the pandemic wreaked on the world, but it was the best summer of my life.

It was the summer that changed my life.

We walked the beach and hiked the forests. We discovered huge mushrooms and tiny ocean creatures. Spending most evenings around the campfire, drinking too much wine, we took in the sound of the waves, the beauty of the sunset, the peace of the coast.

I sat still, maybe for the first time. My husband and I talked more deeply, with no internet or decent cell service to distract us, and I expressed things I’d never thought to mention, or maybe things I’d forgotten.

One of these was the Life Plan I’d written some 25 years earlier, after finding myself single, pregnant, and determined to “do parenting” better than my own mother had. I vowed to break what I called the “chain of crazy,” even while recognizing I was bringing a child into the world in less-than-ideal circumstances – alone and with marginal faith in my baby’s biological father, who I had no desire to marry.

Back then, I outlined it all: what kind of parent I wanted to be; how I would manage single motherhood; where I would live; how I would work, what kind of relationship I wanted; what dreams I would achieve. It felt like a daring act, a rebellion against what I had been shown I deserved, growing up. My mother’s messages, however unconscious, were clear: Money is always scarce; life is a struggle; we choose abusive men; it’s impossible to stay healthy; don’t aim too high. Maybe don’t aim at all.

Sitting around that campfire, a quarter of a century later, as I shared the Life Plan story with my husband Tim, a realization dawned: I’d accomplished most of the things on that list. I’d started a successful business that enabled me to work virtually (before that was a thing). I’d raised a happy, well-adjusted, kind, and funny son. I’d married a man, one who not only supported and encouraged me, but who had adopted my son and partnered with me in raising him. Miraculously – and with a lot of work – I’d somehow mostly overcome the doubts, shame, fear, and distrust that had shadowed me. I’d moved beyond what I’d been taught. I had, indeed, broken the chain. Some might say I’d “arrived.”

There were only two items on the legendary Plan that I’d yet to realize: Live at the beach. Write a book.

“Maybe this is the place to finally complete that list,” I said to Tim, afraid of the words and the commitment they represented, even as they left my mouth.

“I’m so glad to hear you say that,” he replied. “I’ve been internet-searching properties since we got here.”

That was in August. We made our first offer on a home in October, in a market insane with competition, perhaps with others like us who wanted to make permanent the peace they’d discovered on the North Coast. We made a second offer in December. Finally, the following February, we prevailed, landing our tiny treehouse above the majestic beaches of Manzanita. We moved in that March.