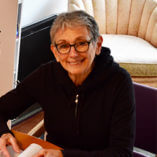 A veteran of 40 years of teaching, Marcia moved to Portland in 1992 to work with Kim Stafford’s Northwest Writing Institute at Lewis and Clark College. Her first visit to Manzanita was for a NWI faculty retreat. She bought a cabin in 1997, eventually making it her home in 2013.

She has worked all her adult life as a teacher of writing at colleges and universities. For her the most satisfying aspect of that work has been supporting students and faculty with individual writing projects they then carried into the world. She has also served as secretary for the North Tillamook County Library Board and as consultant in writing for businesses, nonprofits, and individuals.

Fun Fact
Marcia and her husband renovated a 19th century Brooklyn brownstone in New York City and raised two daughters in it. Marcia congratulates herself on landing in the “little apple” from the Big Apple.