June in the Wonder Garden 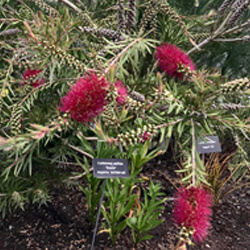 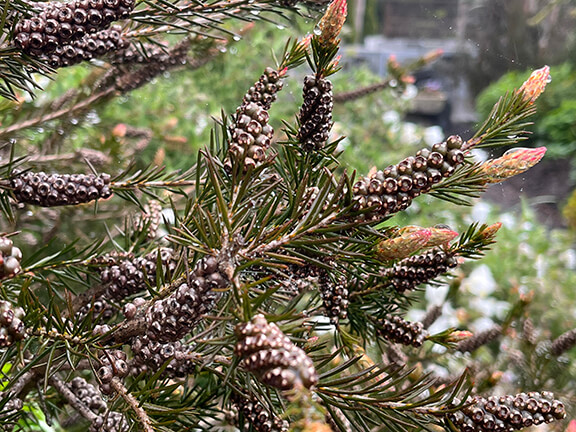 Evergreen, architectural, drought tolerant and arresting. Pale lemon to hot raspberry choices of bloom. Loves the hottest, sunniest spot in the garden where it never wilts or fades even while others wither and stoop.

Is it any wonder we covet Callistemon?

You may think you’ve never heard of this genus but its common name tells all: bottlebrush. Callistemon flowers bear an uncanny likeness to that utilitarian gadget; with their cylindrical shape and bristly texture, you’ll never confuse them with anything else once you see them in bloom.

And see them you will, shortly, in the Wonder Garden, though after our dark, wet spring it’s hard to say when in June their showy stamens will arrive. So showy, they inspired the plant’s botanical name: ‘cali’ meaning beauty and’ stemon’ indicating stamen. Et voila, Callistemon!

In their native Australia and in sunny CA., Callistemon get quite large and can be ungainly. By contrast, our largest variety in the WG, ‘Eleanor,’ will top out at 6’x6’ and though irregular in shape is easy to keep thoroughly graceful in form.

Soon enough, ‘Eleanor’ will be air-brushed in shades of magenta purple, admittedly unusual but surprisingly easy to combine with other late spring colors. She wears her flowers like so many bangles at the ends of her long arms where they add flair to her statuesque shape.

We like her so much, we’ve got several scattered around the WG, in addition to a number of pale yellow and chartreuse selections, all conifer-looking at first glance and happy with full sun and no summer water.

But on second glance, you’ll see this is no conifer. Callistemon branches tell a very distinct story.  After the beautiful stamens fall, what’s left are intricate rows of seed capsules that cling like limpets to the limb. Then new growth appears, but not from a new stem or branch. No! The leaves seem to come out of the limpets. And out of the leaves, next year’s flowers.

Fine, don’t take our word for it. Come, see and covet our Callistemon during June in the Wonder Garden.