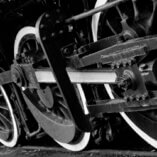 The first time you jump on a moving train, it feels like flying.

Many of the elements of flight are there: steady forward motion, exhilarating wind in your face, the world zipping by below you. Adding to the illusion, in my case, was crossing a towering train trestle almost immediately after hopping on board the westbound Union Pacific out of Spokane in June, 1994.

I had just graduated from high school and was feeling my oats. A lifelong train nut, I spent a great deal of time on the elevated railway running through downtown Spokane. Eventually, I dared to jump on a train as it lumbered through town, riding for a few blocks before jumping off in giddy, rebellious ecstasy.

Before long, the short hops became as casual as catching a bus, and I needed a bigger hit. I found it when I saw the perfect score: four big yellow engines hooked to a mile-long train, waiting its turn at a stoplight. The patient giant pointed west across the Latah Creek Bridge, a massive span towering 200 feet above its namesake. As the four iron horses began to whinny in four-part harmony, spewing hot diesel exhaust skyward like jet engines repurposed for terrestrial toil, I saw my chance for adventure start to slip away. Suddenly seized by a sense of purpose I had yet to encounter in my 17 years on Earth, I ran up the gravel hill, grabbed an iron handhold and hopped on a hopper car.

The initial high was substantial, keeping me buoyed for hours as the train chased the sun west across the channeled scablands of Eastern Washington. I barely noticed the deafening noise or the relentless wind—it was all part of the deliriously novel experience.

As the lengthening shadows gave way to twilight, however, the novelty started to wear off a little bit. When I jumped on, I was wearing shorts and a T-shirt, standard issue gear for a sere and searing Spokane summer. As night fell, however, the wind chill created by the train’s 70 mph speed no long felt like summer.

In daylight, I recognized enough landmarks to have a general idea where I was. As night fell, not so much. With no clue where I was, it got colder and colder. I tucked my arms inside my t-shirt and curled up in something of a seated fetal position.

Sometime before dawn, the train just stopped. No fanfare, no parade, nothing—it just eased up by a field and stopped. Shaking from the cold and bleary-eyed, I unfurled my stiff legs and hopped to the ground, trying to stay out of sight from the engineers, brakemen, and other would-be captors.

I scampered along a dirt road by a field like a rabbit, finally running into to a real road. Feeling less paranoid but still weary and bleary, I ambled along until I hit Highway 395 near Hermiston. Only then did I realize how screwed I was. Hermiston is in Oregon, a three-hour drive from my poor worried mother in Spokane, Washington.

To get home, I would have to revive another long-lost art: hitchhiking. Positioning myself on the shoulder of the northbound highway, I gamely stuck my thumb out like I had seen in the movies. To my amazement, a pickup truck stopped. A group of young Deadheads, they were headed to Seattle for what turned out to be the Grateful Dead’s penultimate summer tour. The only trouble was they were headed toward Ellensburg, adequately north but several hours too far east. Still feeling adventurous, I rolled the dice and hopped in, soon exhaustedly nodding off to the pleasantly ordered chaos of Jerry Garcia’s guitar.

When this sunshine daydream inevitably came to an end, I was more or less back where I started, only standing beside a much bigger highway: I-90, my hopeful ticket home. Again, to my surprise, my thumb nabbed a ride, this time a middle-aged man in a van (I know, red flags). Luckily, he was a cool dude who used to hitchhike and was glad to repay the karmic favor. We talked about music the whole way back to Spokane, he proselytizing for Jethro Tull and Deep Purple, and I campaigning vigorously for Ice Cube.

Before I knew it, I was back in Spokane. I don’t remember if I told my mom the truth about the trip (I like to think I called from the road with a cover story), but I sure as heck couldn’t wait to brag to my friends about my adventure. I stumbled the familiar walk home from the train tracks like the strung-out hobo I would imitate for years afterward. Unlike this stereotypical hobo, however, my addiction was not drugs or alcohol, but to the trains themselves—my preferred mode of flight.

Bio: I was lucky enough to be born in Oregon. Some of my earliest memories are of frolicking on Cannon Beach, Short Sands and a litany of local littoral locations. My father has lived here for over half of my life, and consequently I have grown quite connected to the area.