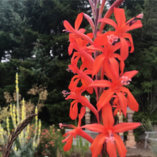 Lest there be anyone bemoaning the absence of SUN & HEAT thus far this summer, we at the Wonder Garden can only say: BRING ON THE CLOUDS!  The cooler overcast days of late June and early July have put the WG over the top, with current flowers lasting longer (check out the English whack job back by the clay columns, Dianthus ‘Chomley Farren’), and high-summer flowers a bit delayed (keep dozing, Lobelia tupa  roast till you’re red!). The overall result is a glorious extension of this year’s hallucinatory color palette, an extension we are grateful for, given that we’re under NO SMALL PRESSURE to have the WG looking absolutely fabulous for the Garden Party Fundraising Event. 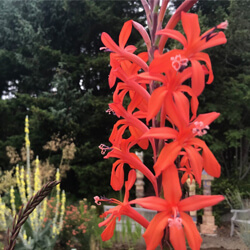 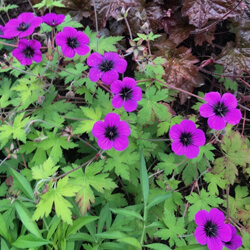 And so a shout out to the non-stop blooms of our new, steamy orange Watsonia from South Africa’s Cape floral kingdom and to that dark-eyed show-stopper, Geranium ‘Ann Folkard’, a genus native to Turkey, Armenia & the Caucasus but named after the very English ‘Ann’ after hubby Oliver found this golden-leaved hybrid is his garden.