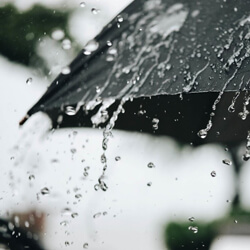 As it happened, I was passing through Rainy Springs, Oregon, that rain-swept evening when I met a peculiar woman named Lola.

It was late October and I hadn’t seen rain this hard since I left the Midwest years ago. Back in St. Louis, we’d a called it a gulley washer. So, I stopped for a beer at the Bird Brain Tavern, figuring I’d ride out the storm and head up to Astoria the next day.

It was a Friday night and the downtown joint was alive with music and the madcap roar of drunks. When I walked in, I saw her straightaway, nursing a tall frosty one beneath a row of plastic fish dangling from an aluminum rod.

I pushed in beside her and watched her bury a full platter of fried chicken from a greasy paper box. “Damn, this ain’t bad,” Lola announced to no one in particular. Though tucked into her meal on the barstool, I could tell she was tall with long white legs, thin as saplings.

Much later, I’d learn that Lola Knight was a star center at Seaside High School, Class of 1985. She won an athletic scholarship to Oregon State, but turned it down after she met a one-handed cook at Vera’s Café and ended up getting pregnant.

Lenny Jones split the sheets not long after and, last Lola heard, he was running a souvenir shop he called “Lefty Jones” outside the Nixon Library in Yorba Linda. So, all by her lonesome, Lola raised Dick Jones, who was killed in Iraq the day before he turned 19.

“For reasons known only to God, Lenny worshipped old Tricky Dick,” Lola confided. “You won’t believe the middle name he gave our boy.”

Lola and me, we sat quiet for a good spell after that, content to watch the rain pound down outside the Bird Brain and listen to the logging trucks rumble down Hoffman Avenue, past the telephone poles all dressed up for Halloween.

“Jack,” she whispered, “the rain scares me. It sounds so loud. It reminds me of my Papa. He was an undertaker and sometimes he had to pound the bones – you know what I mean, Jack, pound the bones into shape – to get them ready to show the body, so it looked good to the living.”

“Did your Papa ever play classical music when he did his pounding?” I wondered.

Suddenly, the power went out. All of us turned silent in the dark. Candles were lit. The wind blew away deck furniture and the rain whined at the windows.

Lola’s face, though she was still sipping her drink, seemed somehow swollen, and a little  terror seeped into her dark eyes.

“Did you ever vote for Nixon?”

Later that night, under the covers at the Sea & Sand Motel, Lola asked, “Have you ever met an undertaker, Jack?”

‘Only one time,” I replied. “His name was Stephen, and once he told me how he loved it when it rained. He said it made it easier for the gravediggers, that it was easier for them to plop his dead clients into the grave.”

“He seemed like a very smart man,” said Lola.

“Oh yes, he was that, all right. What I liked most about him, though, was the weird little rhyme he used to recite whenever it rained.”

“He’d say it in this very strange singsong way: ‘Rain, rain, go away, come back when the Dodgers play.’”

Ellis is a longtime journalist who worked primarily as a political reporter at the Anchorage Times, UPI, the Los Angeles Herald Examiner, and the Seattle Post-Intelligencer. He retired several years ago and, after decades of vacationing on the Oregon coast, finally settled in Manzanita with his wife Lynn and their ocean-loving Australian Shepherd Piper.