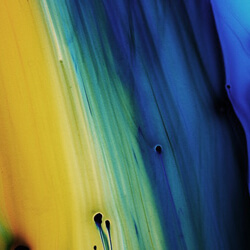 Color has had a hold on her for as long as can be remembered. From a young age it was noted that she often changed clothes several times a day if given half a chance. Her motives for doing so were mostly misunderstood. Each change stemmed from a sudden urge for adornment with a particular color. Impulses which often overtook her in response to the busy kaleidoscope of family life. Colors changed everything.

As a very small child she made offerings to the trees, of tiny medicine vials filled with colored water: sparkling red beneath the silver maple, a bottle of blue tucked into the earth near the old mulberry tree, green snuggling with the gnarled pie apple’s roots, and sunny yellow under the tiny ginkgo tree her mother had planted.

The lure of the food coloring box drew her back again and again.  Her somewhat untended feral upbringing, youngest in a large family, provided ample opportunity for wet color experiments in the summers.  She dyed milk pink before she drank it – just 2 ruby red drops were enough – and tried to turn the peanut butter green.  She filled a wash tub with hose water, watching with fascination as the swirls of pigment unfurled from the squeezed drops. She removed her clothes and climbed in, immersing herself in the colored water, and trickling rivulets from the bottle onto her skin in a somewhat successful attempt at transforming herself into a blue human.

It was a dark day when the supply of food coloring was at last emptied.

Luckily, her obsessive activities could eventually be resumed. Her color famine was unwittingly abated when in August a teenage sister restocked the emptied supply in order to complete a 4H baking project.

Come winter, the house was crowded with eyes on the lookout for mischief, everyone driven indoors by foul weather and short days. They were onto her in no time, and the food coloring was moved to an undisclosed location. Leaving no choice but to move on to melting crayons atop the baseboard heaters behind the couch, an obvious segue from food coloring when one considers her unslakable thirst for color combined with the severely limited access to paints, markers, or other options.

Watching Saturday cartoons, while lying on the bright red living room carpet wearing a beloved pair of purple corduroy bellbottoms, it occurred to her the pants would be particularly pleasing if worn rather sacrilegiously with her red church shoes. A combo that was not allowed on Sundays, nor any other day of the week. She periodically donned them together covertly in the mornings, in an attempt to fulfill her dream of getting onto the school bus unnoticed wearing the toothsome combo. Unfortunately, her plans were foiled repeatedly. It was incomprehensible to her why this was so. Why must such beauty be denied the world?

By high school she was reduced to deliberately wearing two different colored socks in an effort to soothe her color desires with some subtlety. Glancing down at them during class with secret delight made the crushing boredom tolerable.

In eleventh grade psychology class she at last understood that the nourishment by color that she enjoyed was likely the result of a fortunate anomaly, synesthesia. Certain color combinations being so pleasing that her mouth became flooded with saliva – while others caused her teeth to hurt.

As it turned out others were not experiencing this phenomenon. This brought up feelings of sadness in her, for others seemingly experienced color in much more limited ways, bereft of the multi-sensory smorgasbord that the world offered to those such as she. They walked unknowingly in a bland universe in which tan peanut butter and green apple sauce were of indistinguishable valor from more sublime options. She, as it turned out, was living in Oz, while they, they, were living in grey Kansas.

At long last her attempts at green peanut butter were vindicated. It was special perception that inspired her longing to uplift the purple grape jelly by pairing it with a vibrant green, rather than the somewhat disappointing tan of the peanut’s natural hue.  Synesthesia also explained the mystery of why the obviously superior pink apple sauce made with red apples was not sold, while the insipid pale yellowish sauce made with green apples was stocked on grocery shelves.

She vowed to keep her own council about color, from then on. Nothing good could come from trying to explain to those fundamentally unable to perceive.

As an adult her wildly colored garb and technicolor house were noticed, even commented upon at times. Her comfort with, and acceptance of, her own preferences rendered her immune from any judgements. She happily planted color filled gardens, drank pink lemonade, and carried on.

Iris Sullivan Daire is an artist living near the Columbia River in Astoria, Oregon with her family.