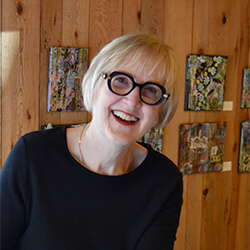 Mary Roberts joined the Hoffman board in Nov. 2017, after becoming an active volunteer and participant in the Clay Studio and overseeing improvements in the Center’s Gallery.

Mary earned a degree in Business Administration with an emphasis in management from Portland State University. From 1995 to 2005, she served as CEO of Rejuvenation Inc. in Portland. Prior to that, she was Chief Operating Officer for Hanna Andersson, also in Portland.

In the non-profit world, Mary has served on the boards of the Women’s Foundation of Oregon, the Bicycle Transportation Alliance, the Natural Step Network, Transition Projects, Artist’s Repertory Theater, the New Rose Theater, and Northwest Business for Culture and the Arts – an organization that helped found the Oregon Cultural Trust.

Fun Fact:  When not working on Hoffman stuff, Mary may be found in her clay studio. A revitalizing place, Mary finds something magical in the making of something and losing oneself in creating. This time is often accompanied by audible books through the Tillamook County Library system.