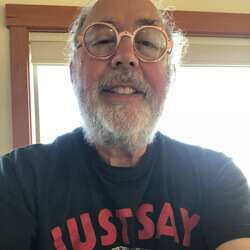 Steve has had three careers:  most recently 17 years as Director of Planned Giving at the OSU Foundation and Willamette University; 13 years as an attorney, primarily as a tax lawyer at Stoel Rives in Portland; and 10 years in faculty positions teaching math and statistics.  Steve is most proud of his B.S. degree from Cooper Union.  He also has earned a PhD in Statistics and a J.D.  Steve’s skills include fundraising, writing, and balancing a checkbook.

Steve and his wife Barbara purchased a house in Manzanita in 2012.  Until early 2020, they were part-timers.  Since then, Manzanita has been home.  Steve has served on the Board of North Tillamook Library Friends since 2018, and he was elected President in 2022.  Previously, Steve was a founding member of the Nehalem Bay Pickleball Club and President of the Irvington Community Association in Portland.

Fun Fact: At the age of 20, Steve drove a taxi in New York City.  He might still be driving a cab if not for fear that his mother would suffer a heart attack.