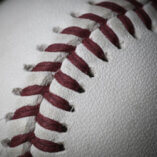 Memoir:  My father played baseball once a year. No glove, no cleats, no practice, but a deep affection for family. On a grassy field he played with brothers, cousins, and a handful of young bucks eager to show the old guys how to do it. It went like this.

Every summer of my childhood, four generations of Peterson’s gathered for a Sunday afternoon picnic in the town park. Some of us were local, others came from towns and farms 60 miles away; the rare out-of-state relative was an immediate guest of honor. Long tables were quickly draped with mismatched tablecloths from two dozen kitchens, then obscured by roasters of beans, meat casseroles, vegetable side dishes, fruit pies, and cannisters of cookies. At the center was a heaping platter of Aunt Lizzie’s homemade buns, slathered with butter and packed with thick slices of ham. A rainbow of Jell-O salads was displayed at one end of the table, with sliced bananas in the cherry Jell-O, and shredded carrots in the lime. The children wisely avoided the latter.

Families filled plates to overflowing and ate on blankets spread in the shade. Camp chairs had not made their way to our neck of the woods, but a few webbed folding chairs were reserved for the most senior Peterson’s, eight siblings, all past 80, my grandma among them.

Appetites satisfied, younger kids ran to monkey bars and swings while older siblings lounged in open cars, listening to the Top Forty and flirting with cousins twice removed. Mothers in cotton dresses rolled Sunday nylons down to their ankles, and murmured among themselves as they nursed babies and corralled toddlers. Mothers without these duties shoo’d away flies and wasps that by mid-July were fat from picnics such as ours.

The fathers, after eating, fell asleep under trees, notably the farmers who were up at five to milk cows. They slept as if drugged, but once revived, they were ready to play ball. It was the only day of the year they played.

Growing up on farms in the 1930’s, sports were a rarity for my father’s generation. An exception was Uncle Carl, a natural athlete who as a young guy was an amateur boxer of some success. He was likely the one who summoned that it was game time and enlisted help in staking out home plate, bases, and a sketchy pitcher’s mound. He brought forward a wooden bat, a well-worn hard ball, and a mitt. Other mitts appeared, then a longer bat, and a softball that soon gained favor. None of the players wore sneakers, none wore breathable slacks or shirts that wicked moisture. Two wore brimmed caps that advertised seed companies; one, a striped engineer’s cap. The rest were bare headed.

As a child I paid no attention to how teams were chosen or assigned, but I know it was done fairly, each team with a potential star, three capable hitters, at least one utility player, and many volunteers for outfield.

Despite hereditary similarities, as ball players there were obvious differences. My father was the oldest, nearly 50, and disinclined to prove anything to those decades younger. Dad was stocky and slow; his brother Roy was lanky, quick, and played most innings with a cigarette in his mouth. Their cousin Kenneth, wearing bib overalls, kept his knees locked as he swung the bat, and when he struck out, smiled, “Aw shucks.” His 18-year-old son, Gene, his hair curly, his eyes sparkling, made up for the old man, reliably powering the ball to the outfield and tearing across bases like he was showing off for a lover.

The game had started with affable bravado and some jockeying for role of Alpha Male, but any rivalry was easily sedated by the sultry, July weather — humid and 90 degrees. At the end of two innings, players on both sides leaned into second chances and two-run, at-bat limits. With no umpire, decisions on balls and strikes became an entertaining sideshow. Players randomly walked off mid-inning for water, for shade, for a check on their stamina. Yet through it all, there was no letting up of full-throated banter, for kidding and family nicknames, and the razzing of the young bucks by the old guard.

This was the point of the game. To be with family, to draw forward old stories and to write new ones. To pass forward traditions, not of a ballfield, but of generational respect, support, humor, and how life is best played without keeping score.

The game over, the men slapped sweaty backs, mopped their brows, and put their faces under a park spigot, guzzling the cold water until they gasped for breath.

Julie Young is an early childhood advocate, outdoor enthusiast, and writer. She and her husband no longer have a beach residence, but maintain an enduring bond with the North Coast through many short stays throughout the year. Julie’s stories have been published in The North Coast Squid and The Timberline Review.