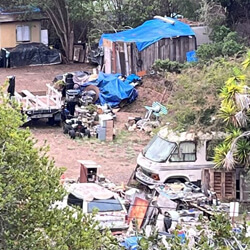 “Is someone knocking at the door?” I asked.

Bob and Max considered the sound. “Yes, I think so,” they agreed.

Max surreptitiously walked to the door. Through the vertical side window they could see that yes, there was a white guy standing on the front porch. He was thin, his coat tattered, hair and beard disheveled, possibly in his forties. No one Max recognized.

We speculated as to why someone might be knocking on doors on a Sunday in the drenching rain, in northeast Portland. A missionary? A salesman? A neighbor?

“Well, elections are over and so they’re not canvassing,” I said and mentioned that I had recently been knocking on the doors of strangers, canvassing for our candidate for state representative.

“Were people reluctant to open their doors?” Max asked.

“Some clearly were home and ignored me. But most people opened the door. Of course, I have the little ol’ lady advantage.” I continued, “When we lived in Lake Oswego, there was a home invasion two blocks away.”

“Home Invasion? Is that like a burglary?” Max queried.

“Different from a burglary in that the homeowners let the thieves in. Someone knocked. They opened the door. The invaders forced their way in, tied up everyone who was home, and robbed the house. They were there for hours. Must have been terrifying,” I said.

The knocking came again. He must have known we were ignoring him. No doubt he could hear our voices. He wasn’t getting the hint that we weren’t going to open the door.

Sossity, who had been in the kitchen at the back of the house, came down the hall. She heard the knocking, looked out the window and opened the door.

“I’m real hungry and cold. Can you give me something to eat?” he said. “Anything. Please. I’d really like some chips or something like that. But anything.”

“Oh, yes ma’am. Yes. But you don’t have to go to any trouble. Anything’s okay. Maybe something to drink. Do you have a Pepsi ?”

“I have ginger beer. It’s non-alcoholic, like ginger ale.”

“I’ll be right back,” she said, gently closing the door.

In the kitchen, Sossity served up a bowl of stir fry and popped it in the air fryer. From a large bag she portioned a liberal amount of chips into a smaller bag, then cut a generous slice of carrot cake. She retrieved a cold ginger beer from the frig and headed to the front door, arms full of ginger beer, chips, and carrot cake.

I stood in the hall behind Sossity, curious to get a look at the man on the porch, to see his face. But he wasn’t a sideshow. I hung back.

“I’m warming up a meal for you, but in the meantime here’s something to start with.

I thought you might like a piece of cake. I guess you’ll be eating dessert before your meal today,” Sossity laughed softly.

He immediately opened the bag of chips and scooped them into his mouth.

Sossity and I went to the kitchen to wait for the stir fry to heat up.

“It’s painful,” I said, tearing up. “To think of this man with nothing. Cold and wet. Hungry. Thank you for showing us the compassionate thing to do.”

“It’s always been the Haves and the Have Nots,” she said. “I’ve been a Have Not at times in my life. And now, here, finally in a home we own, I feel such a sense of security and gratitude. I have so much.”

“Max,” called Sossity, “Will you find those emergency blankets?”

Max set them on the shelf by the front door. When Sossity opened the door the man was bouncing up and down, shaking his hands for warmth.

“I wish I had a blanket for you, but we just moved in, so we got rid of our extra blankets. I do have these emergency blankets. Could you use them?”

“And here’s a bowl of veggie stir fry with sirloin steak and rice noodles. Is that okay?”

“Oh yes. Thank you so much, Ma’am. I’m so hungry. Alright if I stay on the porch and eat?”

He unfolded one of the silver blankets and wrapped it around him, then settled into the corner of the porch, cradling the bowl of steaming stir fry.

Sue McGrath has owned a home in Manzanita since 1991 and had the great gift of moving here full time in 2016. She is grateful for the community of writers she has found, and for the endless inspiration of the majestic coast.