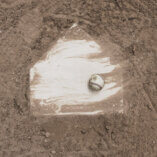 Nonfiction:  I love baseball. It offers a sense of order in an often chaotic, messy world. There is poetry in its movements and strategy. Unlike other sports, where the main goal is often hitting other people as hard and as often as you can, baseball demands discipline and awareness.

That being said, when it comes to swinging a bat or catching a ball, I am about as athletic as a cinder block. I’m less George Brett and more George Costanza. It’s been a lifelong affliction.

When I was in the 5th grade, a group of older kids would gather every afternoon at the ball field behind Kennedy Elementary School in St. Joseph, Minnesota for a pick-up game. It was springtime tradition and outsiders weren’t allowed. Younger kids who tried sneaking in were unceremoniously chased off. If you were lucky enough to be friends with an older kid, they could bring you along to play. Those invites were rare, kind of like being asked to sit with Tom Hanks at the Oscars. That year I was friends with a 6th grader named Joe Stong. I was growing fast and was taller than most older kids, so Joe likely mistook my physique as athleticism. But I was a clumsy, awkward kid. When I wasn’t tripping over my own feet, my big mouth was getting me in trouble. I never knew when to stop lobbing clever, profane insults at older kids, which had made me the recipient of several wedgies and placed me on the 6th grade hit list.

Walking onto that ball field felt a little like being the new inmate getting off the prison bus. Angry faces pressed against chain link fences and promised me all manner of retribution. Still, I had Joe’s protection and I planned on launching a baseball to the moon which, according to grade school logic, would make me everybody’s friend.

The game moved along and they skipped my first turn at bat. Then my second. I was getting a little nervous. I wanted to hit. I wanted to make the 6th graders like me. Joe demanded they let me hit and they acquiesced.

I strode to the plate with the confidence of Babe Ruth, the menace of Willy Stargell, the swagger of Reggie Jackson. The opposing pitcher was Jason Gangel, a particularly mean-spirited kid who enjoyed pelting younger kids with snowballs in the winter and spit balls in the summer. I’d called him a neanderthal once and he’d rewarded me with a bloody nose.

When he saw me step to the plate he grinned wolfishly. He turned to his team and said “Haag can’t hit, everybody move up.” Let me be clear: in the cutthroat world of grade school sports in the 70’s and 80’s, there was no greater insult than having another team move up when it was your turn. It meant you couldn’t hit and weren’t worth worrying about.

I bristled, but honestly Jason was right. He’d seen me play baseball in gym class. Because I had a habit of closing my eyes when I swung the bat, I either lost my grip on it or fell over. Classmates and teachers knew to seek cover and alert the school nurse when it was my turn to hit. But that didn’t stop me from standing in against him that day. I’d prove him wrong.

And I did. He lobbed me a slow pity pitch and I swung. Eyes shut, I felt contact. I peeked to witness a glorious sight: the ball soaring skyward over the drawn-in defenders. My mouth fell open. Jason Gangel’s mouth fell open. An entire legion of 6th graders stood there, mouths open. I cheered. I hollered. I danced. I waited for everyone to mob me with congratulations.

What I didn’t do was run. One of the most crucial aspects of the game of baseball is that once a batter hits a ball, his next job is to run. Caught up in the moment, I skipped that important step. In fact, I was still celebrating at home plate when the ball was retrieved from the outfield and relayed to Jason Gangel, who stomped up to me and tagged me so hard I still have the bruise.

That was the end of my baseball career, but I’d had my moment. I may not have a case full of baseball trophies but I eventually learned I was the holder of a rather interesting record: the longest out ever recorded at Kennedy Elementary. It brings to mind the words of baseball sage, Bob Uecker: “I set records that will never be equaled. In fact, I hope 90 percent of them don’t even get printed.”

Dan Haag has lived on the North Oregon Coast for 30 years, the last 20 of which have been in Nehalem. He has been the manager of the Manzanita Visitors Center since 2013.