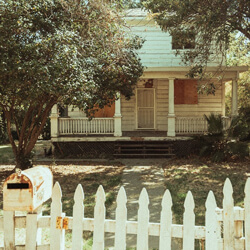 One summer vacation, a stranger appeared at my family’s front door.

It was 1960, the year before I was born, so I wasn’t there to see the puzzled look on my mother’s face as she absently ambled toward the rickety screen door. Dishtowel in hand, pushing her hair back from her sweaty forehead, she found herself face-to-face with a small and disheveled young woman. She looked to be in her mid-20s. Behind her stood her equally rumpled husband, and four weary-looking, fidgety, and grimy kids. They seemed hungry.

The stranger’s name was Denise and she was looking for her father, whom she hadn’t seen in over a decade. Her dad, it turned out, was our dad, too. She was just one of the four children from his other family – a family my mother didn’t know existed.

Destitute after a devastating job loss, Denise had come to find her dad, hoping he could help her out and give them a place to live for a while.

So, that summer vacation, the couple and their kids, all under the age of 10, lived with our family. Two kids to a bed, eight kids crammed into one or two small bedrooms, they slept head-to-foot, foot-to-head.

None of my siblings remember how Mom reacted to this shocking news. Maybe she didn’t react at all, already numb to the constant turmoil around her, and accustomed to looking away. If my parents argued about this, no one heard them. What should have been a bombshell seems to have been taken in stride. They just remember being told these people were cousins who would be staying awhile.

No one told them our dad was still married to Denise’s mother.

Later we learned the backstory. Over a decade earlier, our father and this family with four kids went on a Disneyland vacation, traveling from their home in Michigan. After days of Mickey and Minnie, Pirates of the Caribbean, and Jungle Cruise, the family was about to head home.

“California is so great,” I imagine my father saying. “Wouldn’t it be nice to live here?”

He told his wife and kids he would stay behind to find a job, then would send for them. They left, and never heard from him again.

With his family out of the way, our future father made his way from Los Angeles to San Francisco, where he met my mother, who was raising my then two-year-old brother on her own after becoming pregnant at the age of 19. She was taken by this man, 13 years her senior, who offered to love her and vowed to take care of her and her son. In those days, a single woman with a toddler and no wedding ring gave rise to unwanted looks and opinions. He could save her from the shaming eyes and harsh judgments she found everywhere. In short order, they married.

But when Denise showed up at our front door and the truth unfolded, my mom learned that the marriage was illegal, null and void. My parents had been together nearly a decade; my father had legally adopted my brother; he’d fathered my three sisters. And all this time, he’d been married to someone else. Their marriage was based on a lie.

Their decade together had not been the fairytale my mother hoped for when this man materialized to save her from the embarrassment of single motherhood. While he’d adopted my brother, he’d also belittled, harassed, and physically abused him. He resented him and never accepted him as his own. He’d done worse to my sisters, manipulating them sexually, abusing them for years, telling each of them to “go along” to save the other. No one was spared.

While the details might not have been common knowledge, the extended family seemed to know things were unsettled and unstable in our household. They disliked my father and routinely referred to my sisters as “those poor Dunbar girls.” But no one ever stepped in to help; no one rescued them from the rescuer.

The support the family offered was to urge Mom to cut her losses and move on. When the truth of my father’s other family was revealed, they begged her not to accept this breach and not to marry my father again.  They challenged her: How could she ever trust anything about him, after a transgression this big? After a lie this enormous?

Later that year, my father took his own vacation, returning to Michigan to divorce his other wife. When he got back, my parents remarried. They took a short holiday of their own to rekindle their relationship – a honeymoon of sorts.

I was born a little more than 9 months later.