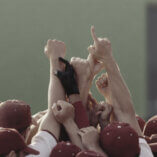 Memoir: There were two religions in my family, Catholicism and baseball.  My Dad was a life-long fanatic of both. Devotion like his came from a deep indoctrination in faith.  Faith that Catholicism would keep you out of hell and that baseball would give you direct access to joy.

As a girl growing up, I was encouraged to dive deep into Catholicism but wasn’t offered much access to baseball other than being heir to the fact that my father had been a professional baseball player. I always cherished this mythical aspect of him even though he had ceased to play while I was still a tot.

Being raised Catholic meant that I spent a lot of mandatory time in our local parish cathedral. During mass I would focus on the grandeur, the opulent beauty and the colorful people. Admittedly, I rarely paid very much attention to the content of what was going on, but I was truly enamored with the spectacle and rituals of it all.

Similarly, every time I was taken to a baseball park as a kid, I had the same sensation of grandeur, beauty and being surrounded by fascinating, and often fanatical people.  When the cheering and jumping and booing occurred, I would turn my attention to what was happening on the field, but mostly it was the visually stimulating surroundings that captivated me.

Now whenever I travel, I always make sure to visit churches in the great cities and small towns of Europe and Mexico. That moment of walking through a cathedral door is much like seeing Yosemite Valley for the first time—unimaginable beauty everywhere and not quite knowing where to land my gaze.

In one particularly grand Italian cathedral, visitors were encouraged to come behind the altar to pay homage to a prized artifact.  As a girl, I did not have access to the church’s stage; that honor was reserved for altar boys.  But that day, standing on the altar in that Italian church, I turned to look out at the pews.  From this vantage, everything was even bigger, grander and even more beautiful. It was powerful; it was a rush.

The few times I have made it to a major league ballpark over the last several decades, I have all of those same anticipatory feelings of going inside a beautiful, holy place and then pausing in visual wonder to try and take it all in.  From my seat in the stands I try hard to pay attention to the game, but mostly I simply love being immersed in the rich details of this cultural cathedral and its rituals.

A few years before my father died he was inducted into the Rochester Red Wings Hall of Fame. My brother and I accompanied him on that trip to receive the honor.  When it came time for the ceremony, we helped keep my Dad stable as the three of us walked through the long tunnel under the stands and onto the field. The stands were packed, the lights were on and the colors were vivid.  It was a powerful rush to see the grandeur of the ballpark from the field.  I could hearing the cheering for my dad and looked around at all of the smiling, devout fans. My dad was so happy to be back on his stage, his altar, overcome and basking in his deep love of the game and faith in joy.

Lorraine Ortiz relocated to the Nehalem Bay area in 1990 and opened the first kayak shop, Annie’s Kayaks, on the Oregon Coast. She is Development Director for North Coast Land Conservancy, plays cello in the North Oregon Coast Symphony, and teaches yoga at NCRD. She is inspired by Onion Peak.