Why There is no Brown in the Rainbow–Lynn B. Connor 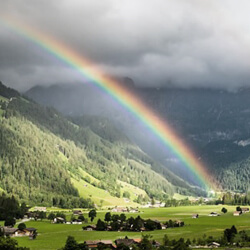 The Sun chased the Clouds from the sky. “The earth below needs my rays to warm the days and make things grow. I should rule the sky,” said the Sun.

Then the Clouds hid the Sun. They insisted, “The earth below needs our drops of rain to make things grow, so the fish have a place to swim, and people and animals have water to drink. We should have the sky.”

Sometimes the Sun thought it had won the sky and shined for many days. It was pleased.

Then the Clouds would grow strong and cover the sky in darkness. The Clouds were pleased.

The little Drops of Rain and the bright Rays of Sun wished the Sun and the Clouds would stop chasing each other from the sky. “Why can’t they share the sky?” they asked each other.

So the Drops of Rain asked the Clouds to give half of the sky to the Sun.

And the Rays of Sun asked the Sun to give half of the sky to the Clouds.

“No!” said the Clouds

The Rays of Light and the Drops of Rain had no more ideas. The Sun and the Clouds continued to chase each other from the sky.

From the earth below, they gathered colors—red, orange, and yellow from the flowers.

The Drops of Rain held the colors and the Rays of Light shone on the drops. Together they made a great arch of color in the sky.

They liked what they saw and returned to earth for more colors. Green from the grass and trees. Blue from the lakes and rivers.

Again they liked what they saw. Why not more colors? They searched the earth. Among the flowers they found purple and violet. The Rays of Light and the Drops of Rain were pleased.

Brown looked up from earth at the red, orange, yellow, green, blue, purple and violet in the sky—beautiful bands of bright colored ribbons.

Brown wanted to be part of the bright colored ribbons. “Did the Rays of Light and the Drops of Rain not see the brown of the earth when they looked for colors?  Or maybe they just did not like brown!”

Looking down on the earth, the Rays of Light and the Drops of Rain saw that Brown was miserable and returned to the earth. When Brown saw them, he said, “Your ribbons of color are beautiful, but…

Before Brown could say another word, the Rays of Light said, “Our ribbons of color quickly disappear. We have come to ask a favor. You are the brown of the earth. You are where the red, orange, yellow, purple and violet flowers and the green grass and trees grow. You hold the blue lakes and the flowing rivers.”

The Drops of Rain added, “We only have the colors for a little while. We would like to come back time and time again to collect the colors you hold. Please share them with us.”

Brown, the keeper of the colors, smiled and agreed to share the colors.

NOTE: The color brown is sometimes considered dull. However, it represents faithfulness, simplicity, friendliness, and dependability.

With degrees in Asian history, Lynn B. Connor planned to be an academic. That idea was short-lived. Lynn realized sharing stories that explore other times and places with children (and grownups, too) is what she enjoyed. Because many of her stories were inspired by an image, she recently began exploring photography. Her stories, poems, and photos have appeared in Squid, Rain, Poet Lore (translations from the Chinese), the Stone Bridge online cafe, The Copperfield Review, and other journals. She has enjoyed being part of the Word & Image project.

For the last 20 years Lynn spent more and more time on the Oregon coast and less and less time in Portland. With regret, this summer she moved to the east coast to be near family.