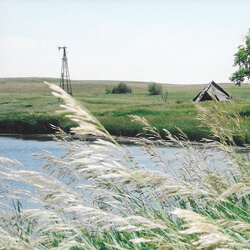 “This infernal wind!” Mother complains between her teeth. She shakes her head, her entire face a frown as she looks out the kitchen window at tall grasses lying flat, so beaten they no longer rise up against the relentless, ruinous wind. Tumbleweeds roll and dance through the farmyard. They whisk inches off the ground, restless and unstoppable.

Mother’s eyes skip across the grass to the clothesline fifty feet from the house. She tells me to help her bring in everything — the dishtowels, shirts, sheets, skirts, slacks, socks, the rags used for scrubbing, dusting, and wiping. It likely took only fifteen minutes for all of it to be whipped dry, as dry and stiff as old barn boards, and now the wind has wrapped everything tightly around the lines, once, twice, three times. The wind at our backs and then in our faces, we find the shirts and sheets are wrinkled into accordions. Two socks, a rag, and a baby kimono are missing, have managed to escape the clothes pins.

“Renegades! Escapees!” I yell in Mother’s direction, cupping my hands around my mouth like a town crier, hoping she will smile, but she doesn’t look my way. I yell that I will look for them in the cow pasture later. Perhaps the wind will die down at dusk, it often does. Mother’s face remains grim. Her hair is a wild halo and her thin, cotton housedress sticks to her thighs as she hands me another pair of underpants. I thrust them into the laundry basket before they can fly to Mars.

In winter the view from the kitchen window is of snow endlessly drifting and swirling. It is as if the wind is telling the poetically inclined snow that the wind is in charge. You have winter, it says. I have all seasons. I am tough, indelible, humorless. Mother uses her fingertips to clear moisture from the window, her face a frown as she considers the drifts, how they’ve gotten taller in the last hour. She wraps her arms around herself and shakes her head.

Today’s laundry dried on the clothesline in minutes, frozen solid, as stiff as corpses. Mother and I fought the snow and howling wind to bring everything into the house. This was hours ago, and all through the afternoon the clothes and linens thaw and drip from thin lines strung back and forth in every room of our small farmhouse. My sisters and I duck under overalls, bras, and pillowcases, hoping not to dirty anything, for Mother’s patience is brittle. Frost creeps up the window late in the afternoon and now it is dark. The kitchen window becomes a mirror while the wind sleeps for a few hours.

The monotonous, unrelenting prairie wind was linked as early as 1893 to what was named “prairie madness” or “prairie fever.” The wind alone did not cause madness; a mix of isolation, cultural deprivations, and harsh weather were believed to drive many people, both men and women, to madness. The men were prone to violence, while the women were inclined to show symptoms of depression. Prairie madness is depicted in literature, plays, and movies. In author Larry McMurtry’s famous novel Lonesome Dove, a woman kills herself after living on the prairie for most of her lifetime, leaving a suicide note with the words, “Tired of the damn wind.”

I expect that multiple barriers kept my mother from finding peace on the prairie, isolation being a primary one. I was two when our farm got electrical power, ten when phone lines finally came to our township. Mother, a town girl who married a farmer, must have often felt very lonely. Yet I don’t remember her speaking of this. It was the wind. Always the wind.

Julie Young’s prose is influenced by the environment, including her Midwest childhood and the Pacific Northwest. Portlanders, she and her husband alternate beach stays between Astoria, Cannon Beach and Manzanita. Julie has been published in “North Coast Squid”, “Surging Tide Magazine”, and “The Timberline Review.”