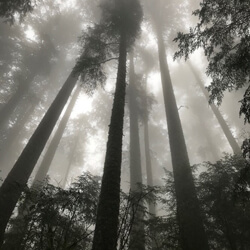 The rain poured down with a relentless vigor, an elemental force that had always been there and seemingly always would be. Fortunately, I experienced only its sound as it battered the dense foliage of the temperate Pacific Northwest rainforest I inhabited, protected as I was by both an ancient tree and a relatively modern tent.

The old-growth cedar lorded majestically over my campsite, its downswept boughs flaring out gracefully at the base like arms of the Virgin Mary. What would be her upturned palms now shed a torrent of cold, wind-driven October rain into a rough 10-foot radius away from her base, affording me ample cover on the leeward side.

I lay back in my sleeping bag, warm and dry as only the occasional drop of water found its way through the cedar’s thick garments to hit the top of my rain fly, a layer of defense rendered nearly unnecessary by my ideal location. The louder it rained, the more I reveled in my comfort, even indulging myself in a few shots of sinful pride. I quickly atoned, however, reciting a few Hail Marys and Our Fathers, using the lace grommets in my boots as a makeshift Rosary.

Once again in the good graces of our heavenly father, I resumed my attempt at rest, hoping for a good night’s sleep before tomorrow’s work began anew. I was nearly asleep, lulled by the steadily chaotic noise of the rain, when I heard a branch snap somewhere out in the bushes.

At first, I wasn’t too concerned. It was, after all, nighttime in the forest, and any number of harmless critters was no doubt bumbling around endearingly. It was probably just a possum, maybe a raccoon—

My mammalian parade was interrupted by the sound of another branch snapping, much louder this time. It would be hard to imagine a solitary possum mustering the strength to break a branch of that size, or even a group of stereotypically clever raccoons. I still wasn’t really worried, rationalizing that any number of medium-sized herbivorous animals could have broken what sounded like a branch of approximately the thickness of a man’s thumb. Could have been a deer, I thought, or… a different deer.

As it grew increasingly difficult to think of believable explanations not involving animals that could kill and eat me, I began to take stock of my situation. The only real weapon I had was a little pocket knife, sharp but hardly sufficient to discourage a bear. Nonetheless, I slowly fumbled around until I found my knife. Trying to open it quietly, I barely suppressed a curse when it bent my fingernail backward. The blade finally snapped open, much more audibly than I had hoped.

I listened in the dark, scanning the noise for a signal I hoped not to hear. For a seeming eternity, I sat in silence, blade at the ready. In my fatigue, I began to have auditory hallucinations, making scary monsters out of the sonic ink blots spilled by the rain. As I drifted off, I started awake when I thought I heard footsteps, not brusquely breaking branches as before but softly crunching the dry twigs under my cedar sanctuary. Once again, I grabbed my knife and waited, heart pounding, but nothing came.

After an endless night, I must have finally drifted off sometime shortly before dawn. I was still holding the knife when I was awoken by the sounds of hounds and men barking in concert. Someone shouted, “Over there!” and I heard the entire party zeroing in on me. Soon, the barking hounds were pawing at my tent, and I felt the considerable effort it took for the men to pull them back.

“This is the sheriff!” shouted one, presumably the sheriff. “Is there anyone in there?”

“No. Well, I mean, I have a little knife—does that count?”

“Drop it and come out with your hands up!” he commanded, and I thought it best to comply. I emerged to be greeted by at least 20 uniformed men, rain dripping off their brimmed hats as they trained their pistols and shotguns at my groggy head.

Later, over coffee at the makeshift command center by the park ranger’s office, the sheriff explained that a convicted serial killer named Gary Lee Clarkson, infamous for both the randomness and brutality of his murders, had escaped from a local prison last night. The hounds had tracked him to my camp before losing the scent. The timeless rain had aided and abetted this known felon, gradually washing away his footprints and his scent until the hounds could but sheepishly shrug.

The last footprints they found were right behind my tree, where he appeared to have sat for some time.

I was lucky enough to be born in Oregon. Some of my earliest memories are of frolicking on Cannon Beach, Short Sands and a litany of local littoral locations. My father has lived here for over half of my life, and consequently I have grown quite connected to the area.