Dementia as a Blessing–Karen West 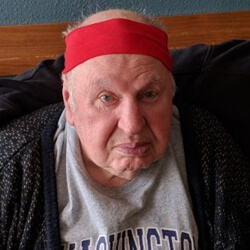 Nothing surprises me anymore when I visit Dad at the nursing home. One day he was sitting in the lobby in his wheelchair wearing skimpy lime green track shorts and a Mickey Mouse T-shirt that was too tight to cover his bulging belly. Another time I found him in the lunchroom finger painting on the table with his mashed potatoes and gravy. Today, he’s donning a cherry red, stretchy headband across his forehead. The kind you would buy for a little girl in the Dollar Store.

“What’s up with the headband?” I ask as I enter his sterile room. “It’s my red band of courage,’’ he says. “My doctor says it’s a magic cure. It will protect me if I keep it on.’’

“He won’t take it off, even when he goes to bed,’’ his aide, Danielle, says. She whispers to me later that he had won it at Bingo.

He’s been wearing it 24/7 and it is starting to smell like dirty socks. I offer to wash it, but he recoils, presses hard on the polyester band, and says: “I’ll die if I don’t wear it.”

Dad is oblivious to the horror show he is starring in. His onslaught of dementia is the beginning of the end of an illustrious life as a brilliant attorney, devoted father of four, and beloved husband.

Just a few months earlier, at age 88, he was in fairly good health. But when mom died 10 years ago, dad pretty much checked out and spent most of his days watching stock-market reports with his cat, Tiger, and ordering dish cloths and sponges from Publisher’s Clearing House.

He’s alive, but he is obsessed with dying.

My visits to his house consisted of excruciating explanations of his bank accounts and insurance policies and incessant instructions for his burial. “I could keel over and die tomorrow so you need to be ready,’’ he would say.

His declaration almost came true a few months later when he suffered a cerebral hemorrhage after falling while stepping out of the shower, leaving him partially paralyzed. He spent the next two years in and out of hospitals and four separate nursing homes, where he had two strokes, heart failure and broken bones from falling out of bed. He recovered physically, but his body is frail and weak, and his mind riddled with dementia.

I used to curse the twisted invader that is slowly erasing my loving, goofy father before my eyes. But I’m grateful for it today. He’s still here. And, for the first time since mom died, he is happy. His make-believe world, where his “girlfriends’’ feed him, read to him and even change his diaper, is a reality show to him. And he likes it.

Now that he’s dying, he is obsessed with living.

His face softens with delight when he listens to Hank Williams on his Walkman or when Tommy Dorsey brings him back to his Jitter Bug days. He tries to stay within the lines as he colors pink bears and yellow clowns, and he beams with triumph when he connects a piece of his toddler-sized jigsaw puzzle.

He likes to visit his caged feathered friends, Gracie, and Allen, and he introduces everyone who stops by to his new puppy, Benny – a cute but creepy mechanical pet. “Have you met my friend, Benny,” he says as I join him in the dining area. “He’s a good doggie.’’

Bingo is his latest love. He instructs me to wheel him in between Lenore and Delores, his house mates who are dealing with their own mental and physical ailments. “Keep an eye on Lenore,’’ he whispers to me. “She cheats.’’ Danielle starts the game by calling out: “B-14.’’ “BINGO,’’ Dad shouts. His brain cannot process that he needs an entire row, and he insists he has won the game.

He continues to shout, Bingo, after Danielle calls each number. When he finally does have an entire row, it is as if he’s won a million dollars. BINGO!!!!!! I have BINGO!!!!!

He’s like a kid in a candy store as he picks out a mini Nestle-Crunch bar from the prize cart. “Is this all I get?’’ he says eyeing Lenore’s stash.

He decides he wants to go to bed so I wheel him back to his room. It’s only 5 o’clock but he explains: “If I go to bed now, they’ll give me four coins under my pillow.’’

He runs his slender fingers over his “red band of courage” and secures it just above his bushy eyebrows. “Sweet dreams,’’ I say as he closes his eyes, grateful that his magic headband is keeping him alive.

I say my own prayer of gratitude – thanking his demons for allowing me to share in his wild ride.

Karen West and her family have vacationed annually with friends in Manzanita for at least 20 years. Her children grew up boogie-boarding, beach biking, horse-back riding, rolling down sand dunes, and exploring tide pools. Karen’s slice of heaven is an early morning walk along Manzanita’s deserted coastline.