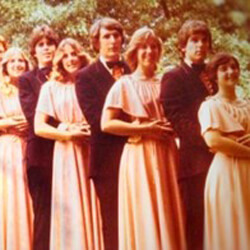 We hadn’t performed together in over 35 years. Yet here we were, about to go onstage in front of nearly 100 people. The 1979 Encina High School Madrigal Choir would sing again.

The show, and the reunion weekend surrounding it, had been in the works for months. Joe, a Madrigal tenor, had the idea to bring us back together. He’d been struggling, feeling unmoored in his own life after losing his wife to cancer. As therapy, he’d been rummaging through cartons of memorabilia: photos, programs from musicals he’d seen or starred in, other forgotten remnants of his past. Among these he found a 1980s-era boom box. In it, he discovered an old cassette tape of a Madrigal concert. He pressed play.

“It lifted a broken heart,” he later recalled.

When the tape ended, he reached out to me. “We were really good,” he said. “What if we had a reunion?”

When he said “reunion,” I thought he meant getting everyone together for dinner, maybe gathering around a piano with some worn sheet music, lobbing jokes and trading playful insults, harassing each other like siblings, as we had back then.

He had something much bigger in mind: A full weekend…and a public concert.

We contacted Becky, a Madrigal soprano, and the three of us began calling the other eight members of the small, exclusive group. In the end, ten of us could make it.

So, here we stood before a mixed-medley audience of friends, family, and other former Encina High singers. The guest of honor was our teacher and conductor, Jack Carey. Mr. C. was in his mid-80s and experiencing dementia. We deposited him in the first row, flanked by his family, in the best seats in the house.

The show mimicked the concerts we’d performed hundreds of times at retirement homes, hospitals, holiday parties, and churches. Strolling arm-in-arm, we started with our signature opener, “Sing We and Chant It.”  Harmonies floating through the air around us, we made our way down the center aisle. When the song ended, we were arranged on stage. Cheers erupted.

The audience loved it as much as we did.

Over the course of the next hour, we performed songs we’d learned decades before, falling back into a familiar performance rhythm as if we’d done it yesterday. Time travelers, our voices blended in the unmistakable, almost tangible sensation of being together. We weren’t as polished as we once had been, but no one cared.

The performance really had little to do with the music itself.

Just being there, some 36 years later, was a testament to all we’d learned from Mr. Carey, speaking of teamwork, commitment, courage, and an overwhelming love for one another. In high school, we’d begun to understand what was possible for each of us, together and individually, through the lens provided by Mr. C.  We learned how to be through his patience and persistence, his love of his vocation and his love for us. Being seen by him, we began to know a bit of our best selves. Some of us had never truly been shown such a thing before, especially by adults.

At the end of the evening, we invited other past choral members onstage for the grand finale, “Twas the Night Before Christmas.” This song had been a tradition at every year-end concert during Mr. Carey’s time at Encina; alumni would pack the stage to sing it, just as we did that night.

Then, as people headed toward the stage, something unexpected happened: Jack stood up to speak. With a shaky yet grateful voice, he recalled decades of teaching, telling us all, “It’s been a grand life for me.”

Then, he moved toward the conductor’s stand.

For a few minutes, the younger, pre-Alzheimer’s Mr. C. was back. His stooped body stood tall, swaying with the music, stately and steady. He cued our voices with gentle hand motions, his eyebrows raised and eyes widening with that same wonder we’d seen every day at every rehearsal, so many years ago. He was, however briefly, the 50-something teacher of our youth.

He was a wonder. He always had been.

When the original reunion concert idea was raised, Becky took me aside to say we really needed to do it, for Joe. It would help him through his grief, she said. She was right, but it was so much more we couldn’t see then.

We couldn’t have predicted what a joy the concert would be for us all. We couldn’t have known Mr. Carey would lead us again, and what a gift that would be, to him and to us.  That night, he showed us the way, as he always had. Our encore performance was a reminder to us all: This man was a maestro.