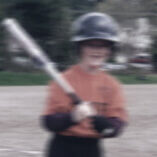 Mainly it was because both the practices and the games themselves were interminably long.  Most of the batters were walked.  And if someone did hit a ball, the outfielders would be startled out of their dandelion reverie as the ball went bouncing past them.  On each team there were one or two players that had natural talent. Or someone who played catch with them every night and took them to batting cages. Mostly it was like watching puppies with too-big paws, while volunteer coach dads tried to keep their cool.

Which made them the best kinds of games.  Because then I could read my book, while keeping one eye on the action.  Unlike soccer, where I shivered wet and bedraggled on the sidelines worrying about twisted ankles and bronchitis, or basketball where I whispered “pass the ball” any time he had the ball. My kid at age nine was built for things other than sports. A little bit chubby because he liked his mother’s cooking, with orthotics in his oversized clunky off-brand sneakers (or soccer shoes, or baseball shoes), to correct his flat feet, he was better at quiet, methodical things, like discussions about Pogs and Pokemon.

Except for one glorious moment that will never be forgotten.

It was a gray Saturday, clouds fat and drooping with wet potential.  I was bundled in a sweatshirt and a fleece and a raincoat slouched in a folding lawn chair I’d brought just in case this field didn’t have those cold metal bleachers I usually had to endure during practice. I sat a little apart from the sporty moms and dads with their “batter-batter-batter” patter and pointed advice, who mainly disregarded the umpire’s “be respectful” statement before every game.  I watched my boy in line with all the other wiggly boys in their bright orange shirts and black sweats—they were the Orioles—waiting for their turn at bat.  He nudged and goofed and it did my heart good that he had that sort of camaraderie, a sort of general cheerfulness to keep him buoyed, even though he seemed to strike out more than he ever made it on base.

It was somewhere in the middle of the game—I have no idea what inning and whether it was the bottom or the top, which I never understood anyway—when it was his turn to step up to the plate.  The bases were loaded and maybe there was one out.  I made some encouraging noises, my voice likely lost in the shouts of his teammates and their parents.  He likely swung and missed once and had been thrown a ball or two.  I was hoping he’d hit one somewhere just out of reach, so that he’d at least get on first base and, if the stars aligned, bring the kid on third base home.

But then the most unlikely, impossibly wonderful baseball miracle occurred.

My son’s bat connected with the ball. The metallic ringing sliced through all our voices, like that particular tone might have opened a portal into another dimension where sound disappeared.  The ball soared higher and higher, and farther and farther, with all our eyes riveted: all the fielders with their arms extended and the kids on base poised to run and the basemen with mitts ready to tag them out, and the two volunteer dad coaches and our team’s parents and their team’s parents and most of all, my son and I, mesmerized by its arcing flight as it made its final descent and landed on—I kid you not—the other side of the fence. The OTHER side of the fence, bouncing once and rolling away to eventually rest in the shaggy grass outside the playfield.

And then we all took one big breath.

And then we were all yelling and jumping, even I was, even the other team’s parents because, oh my god, had we ever seen such a thing all season?  My kid, his face bright red, glanced around sheepishly at his teammates as they screamed, and started his slightly shuffling jog from base to base. For once it didn’t matter that his shoes were too heavy and he didn’t have Joey’s wiry energy or Evan’s long muscled legs.  He had brought three players home, and himself as well, to jump up and down with his teammates while they hugged him and bonked him on his helmet in sheer ecstasy of this amazing, impossible moment.

I don’t remember if the Orioles ended up winning the game or not, but who cares. As far as I was concerned my kid had won the day. I still have his bat.

Vera Wildauer has lived in Manzanita since 2006, after her son graduated and went to college. He grew out of his awkward puppy stage, biked the Seattle-to-Portland when he was fifteen, and still rides his bike all over London. He’s teaching his son early—football (what he calls soccer now that he’s there.)