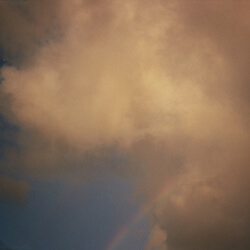 Everyone else was in the hangar, playing cards while waiting for a break in the clouds. Therese sat on the straw bale under the eaves of the office/bunkhouse. Drops of rain strung across the edge of the porch roof like a beaded curtain.

Watching rain had never occurred to her as an activity. It had been something to scurry through on the way to rehearsals, something that interfered with the timely arrival of the pianist who lived on the east side, as all the Angelenos demonstrated their inability to drive on wet pavement, something that made taxis scarce when she needed to get to the airport. Rain made her hair unmanageably curly.

Now she watched the rain for itself. It was not uniform over the desert landscape, at least not today, but poured down with different intensities. The different plants reacted differently, too, adding to a complexity she had never noticed.  The oak leaves either bounced as the drop hit and flicked it off, or accumulated enough moisture to grow a large jewel growing ever more pendulous on the lowest leaf edge before it dropped. Rain dripped deeply into crevasses of bark and stained it dark. The pepper trees shimmered and danced. Cacti were impassive as the water poured over their surfaces, except for beads caught on every spine.

The earth received it differently, too. Some places it soaked in quickly, disappearing into the aquifer. Under the trees where soil had built up it pooled briefly, then slowly soaked in as if the ground was sipping it gently and deeply. Other places, where the ground was hard the water carved small canyons on the edges as it ran off to a place that could accept it.

As Therese sat transfixed by these themes and variations, she began to notice the sounds of the rain. Loudest was the rain’s myriad fingers sounding the porch’s tin roof. More subtle was the susurrations through the trees. Part of this was the wind’s voice, but the wind alone would not sound like this. Drops in the small puddles added additional plunks and plinks. Hard rain striking the sand contributed a subtle hiss. She listened deeply to the music the rain played.

But it was another sound, the sound of the rain itself, that drew her. It wasn’t a sound the rain made with something else, but its inherent music, beyond hearing.

The sound that was not a sound included Therese in its silence. It seeped into her blood, into her breath. It drifted into one cell at a time, offering itself. And Therese offered up herself to it. She felt the raindrops were dreaming themselves to be part of her cells. Each had its own intelligence, independent and yet part of the cloud that was Therese, a cloud being drawn out from the shelter of the porch. Her body moved on its own accord, thirsting for that inaudible sound. It craved the rain on her face. On her hair. On her body, which began to dance from an inner life that was not under her conscious control.

The sensation of being a cloud quickened odd places that were not unusually included in her sense of self. The mist of the rain’s essence opened into her sinuses. It flowed behind her scapulae over the surface of her ribs.  It played her spine like a harpsichord. Her mouth opened and she drank in the sky.

As the rain completed its entry into each organ, and more slowly, every bone, the rain began to dance her.

Therese had been an exhilarating performer because she let her inner body fill her movements.  Even in the most classic ballets she had moved from the inside. But she had always been the one shaping, the one in exquisite control. Now, her cells a cloud of raindrops, she was moved as a witness to a dynamic fluidly she hadn’t even dreamt of. Her whole body trembled in ecstasy.

Maybe I should think that I’m losing it. But somehow I know that I am finding it. She shivered again, not from the warm rain, but from the thought.

And then the rain lifted away, leaving the desert glistening and Therese, soaked to the skin, alive in the sun.

This is an excerpt from the novel in progress “Circling Home”

Katja Biesanz is a writer, photographer, healer and psychotherapist living in Nehalem, Oregon. She and her husband Coby are stewards of land on the north coast. They live with his ancient father, Jake, and Mugsy the cat. This excerpt of her novel in progress emerged from a Writing Lounge prompt.