The Colors of Childhood–Megan Lucas 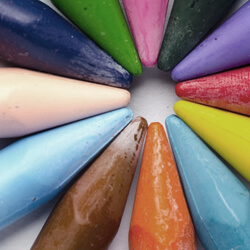 I attended Irvington grade school in Portland in the 80’s, and we lived nearby on the cobbly Tillamook Street. It was lined with Chestnut trees; in the fall I’d take my rusty red radio flyer wagon up and down the street collecting the shiny brown nuts.  Our apartment building was yellow with two stories; our neighbors were of various colors – light brown, dark brown, tan and gold: I had a pod of beautiful friends. My skin was the lightest. A Korean family lived below us; my friends would come out sharing Hum Bao, steamed buns filled with meat. Next door lived my friend, a light skinned brown girl, who listened to Michael Jackson on her record player endlessly. We would sit in her room with yellow carpeting and listen for hours.

My grade school was attended mostly by kids with darker skin tones; the culture and language was drastically different from my own. There was often conflict between kids, with harmful words and fists. Sometimes, there was hair pulling, and always plenty of tears. I would stand nearby with an uneasy stomach, my heart aching for all of them. I did not understand why it was happening, besides the fact that it was often between kids of two different colors.

On a good day kids would beat-box during lunch, or crush milk cartons on the pavement. In efforts to quell the issue, the school made sweatshirts with an image of a crayon box with several children of different colors inside. It included the saying, “FRIENDS COME IN ALL COLORS” with the school’s name below.  I loved my sweatshirt and wore it all the time and kept it well into adulthood.

The family of a girl named DeMoine would watch me in the evenings when my mom worked double shifts. When her family would go to church, I was the only “white” girl in the crowded basement room with a corner entrance off Williams Street.  The women would sing their hearts out, their shiny faces beaming love. I felt safe during these church visits, happy. As I sang, I would get looks but felt accepted.  I did not grow up in church (other than my rare visits when my grandmother came from Minnesota) and this place with the happily singing women was my favorite experience in churches.

In the fourth grade, my mother remarried and we moved to the Oregon Coast. I enrolled in the small Cannon Beach Elementary.  I felt sad and missed my friends. I missed the colorful church, the smells, flavors and sounds of the neighbors. After high school, I moved back to Portland for college, and chose to live in the same neighborhood I had lived in in the 80’s.  This time, there was far less diversity. The neighborhoods had become gentrified, the darker colored folks getting pushed to the far edges of the city.

In thinking of color and teaching my children about diversity, I often find myself saddened by the fact that in our society we discuss problems between people with different backgrounds and colors as issues of race.  “Aren’t we all one human race?” My daughter asked once.

My girls are homeschooled; we have created a layered, weblike realm of learning about race, human migration and evolution, politics, injustice, war, hate, violence, death, illness, climate change, the future of our planet and people.  All of this feeds into a neatly organized package that satisfies rigorous state requirements.  In the echo chamber reality through this pandemic, these topics have become stories, paintings, collages, poems, even math. For us, science is also social science, which is also art, music, poetry, math. We move within this framework fluidly, making the entire effort a symphony.

Recently we collected a basketful of windfall Asian pears, ripe grapes, and a bouquet of leaves from the nearby community garden.  Colors we put into our basket; rosy reds, golden yellow, light red, dark carnelian, green, orange. At home I sort all the leaves from the fruit, drinking in all the colors.  Color binds us to a feeling. It nourishes us in deep places of our psyche, it gives us visual clues about the ripeness, health, and freshness of food, it draws us in to brush our noses against pollen.

We also ascribe to ourselves a color, and within that lies deep beliefs that are difficult to catch and look at.  We try and fail, ultimately because we have lost touch with why we see color in the first place; it cues us into familiar associations to easily identify foods, dangers, changes in the environment. But in terms of other humans, we identify colors as having characteristics such as “good” or “bad.” Not allowing all colors to have equal importance may be our biggest barrier – and the prescription for that fear? More color.

Megan moved to the North Coast as kid and spent much of her youth here as well as several stints as an adult. She moved between Portland, other cities and the coast for many years. She moved back full-time four years ago. It is a place of solace, beauty and healing as well as annoyingly wet – and it will always be home.