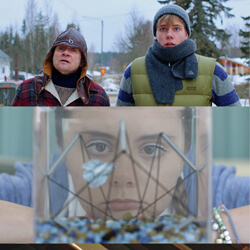 The Wandering Reel Traveling Film Festival returns to Manzanita
with a collection of seven short international and U.S. films at the Hoffman Center for the Arts

Michael Harrington, director/curator of the festival, will attend the screening to offer a Q&A session. The program runs about 80 minutes.

The films – shot in France, Finland, Canada and the USA – will be:

“Washed Away” Directed by Ben Kallan (USA, 2019)
A teenage girl in an Evangelical church youth group must deal with the fallout when her trust is publicly betrayed.
(Narrative: 12 min.)

“Mahalia Melts In The Rain” Directed by Emilie Mannering and Carmine Pierre-Dufour (Canada, 2018)
A timid 9-year-old black girl feels different from the other girls in her ballet class. Hoping to boost her confidence, her mother takes her to a salon to get her hair straightened for the first time.
(Narrative 11:15 min.)

“Burton Before And After” Directed by Courtney Hermann and Kerribeth Elliott (USA, 2018)
An intimate portrait of transition, memory and friendship.
(Documentary: 15 min.)

“About The Birds And The Bees” Directed by J.J. Vanhanen (Finland, 2018)
A funny film about the fact that it can sometimes be a good idea to talk to your parents about sex.
(Narrative: 12 min.)

“Where Do Cats Go After 9 Lives?” Directed by Marion Duhaime (France, 2017)
Lily-May decides to tell those closest to her she intends to end her life at an assisted suicide clinic. When the time of our own death is predetermined, is saying goodbye any easier?
(Narrative: 18 min.)