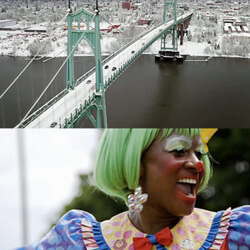 The Hoffman Center for the Arts in Manzanita will screen a set of 16 short documentaries produced by Oregon independent filmmakers The program was curated by Todd Baize Productions of Portland and first shown there in Spring 2019. The program runs 89 minutes.

The films to be shown are “Sandor’s Oregon Trail” by Sandor Lau, “Lucky Lou” by Maria Dingman, “Nikki Brown Clown” by Zach Putnam, “The Ibrahim Brothers” by Julia Reihs, “Nobody’s Trash” by Outside the Frame, “Voices From the Villages” by Outside the Frame, “Hairapy” by Nili Yosha, “Headwaters Farm Incubator” by Chelsea White-Brainard, “Woodblock Chocolate” by Todd Baize, “Big Ben Donuts” Jeff Collet,, “Aerial Reel” by Uncage the Soul Productions, “Niqi” by Bryan Nelson, “Natasha’s Voice” by Zach Putnam, “Just Ollie” by Lathen Gorbett, “Paradise Found: Reckoning with a Congested Gorge” by Ben Mitchell, and “Living With Wildfire: An Oregon Story” by Uncage the Soul Productions.