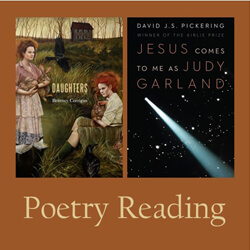 The Hoffman Center welcomes back poets Brittney Corrigan and David Pickering for a reading of their new collections from Airlie Press. Both poets have previously read on our stage as participants of PoetryFest and both have appeared in the North Coast Squid. Brittney’s poem Aubade for Manzanita was the winner of the 2021 Neahkahnie Mountain Poetry Prize.  David’s poem from the Squid, “The Pickerings Try Methodist” was also featured on the Wonder Garden Poetry Post in July.

The first and second place winners of the Neahkahnie Mountain Poetry Prize, Carey Taylor and Lauren Mallett, will also read their winning submissions.  Read more about them here. 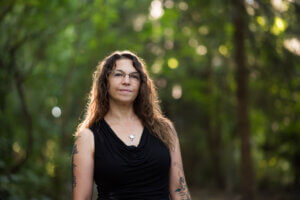 Taking on such topics as aging, rebellion, loss, domestic violence, homelessness, and gender identity, the voices of Daughters aim to turn the reader’s conceptions of the characters on their ends and throw light upon what it means for a girl to come out from under her parents as a woman of her own making.  — Airlee Press

I was raised between the jaws of cats
triple my size, teeth long as hairpins
and paws that could pull down the sun.
The straggle of their manes against
the bars, the heat of their voices before
the whip. Cindered eyes on my father.

— excerpt from “The Lion Tamer’s Daughter” in Daughters, by Brittney Corrigan. Airlee Press

For more about Brittney, visit http://brittneycorrigan.com/. 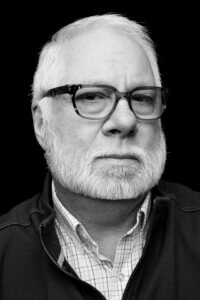 David Pickering is a native Oregonian, having grown up and lived much of his life in the working-class culture of the North Oregon Coast. His first collection, Jesus Comes to Me as Judy Garland, explores themes of sexual orientation, spirituality, family, and aging, often using smart humor and sharp observation.As the book travels back in time, it becomes clear that Pickering has always felt both part of a community and alienated from it.

The title of the book derives from its final poem: a fitting choice since “Jesus Comes to Me as Judy Garland” combines so many of the threads that run through the volume as a whole. When he describes his early affection for Judy Garland, lip-syncing to her music in his parents’ basement, Pickering recalls both the unease he felt as a gay teenager in a hostile environment, as well as the joy of these moments. —as reviewed by Colorado Review

Let yourself float
down the Nehalem, a candle
in a paper boat. Let it be night.
Let the moon pull you past
the gravitational divide, the body.

— from Jesus Comes to Me as Judy Garland by David Pickering. Airlee Press

Against his better judgment, David now has a website, pickpoetry.com, but he much prefers the interpersonal to the electronic.

We live in a dynamic health environment and will make necessary adjustments to keep our community safe.

We're sorry, but all tickets sales have ended because the event is expired.
Event, Writing